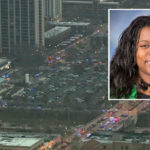 The shooting was a domestic incident, Chicago police Superintendent Eddie T. Johnson said. The gunman’s first victim was a woman with whom he had had a relationship, Johnson said.
The gunman, Juan Lopez, 32, also died, police said.It is unclear whether he died from police gunfire or a self-inflicted gunshot wound, Johnson said.-CNN

Mercy Hospital named its employees killed in the shooting as Tamara O’Neal, 38, an emergency room physician, and pharmacy resident Dayna Less, 25, a recent graduate of Purdue University.
The hospital paid tribute to police and security staff, saying it was “deeply saddened by the tragedy.”

“Every shooting in America is a tragedy, and it is especially senseless when a shooting occurs in the healing space of a hospital,” it said in a statement.
Chicago police identified the deceased officer as Samuel Jimenez, a father of three. He joined the force in February 2017 and recently completed probationary training, becoming a full-fledged officer, Johnson said. A procession was held for him Monday night.
“Today, we mourn Chicago Police Officer Samuel Jimenez. His heroic actions saved countless lives. He ran toward danger. He ran toward those shots. He ran into fire -CNN. Selflessly,” the department said on Twitter.

What happened at Mercy Hospital was a tragic incident. Another example of what shouldn't happen. Don't give prayers. Make change. People are fucking dead and you're wasting tears. Go fucking vote.

This is the face of the amazing emergency physician Dr Tamara ONeal, at work today, before she was murdered.

Tonight, hold her, her family, & our colleagues at #MercyHospital #UIC in your hearts.

And tomorrow, pledge to fight for women like her. Because #ThisIsOurLane. #Enough pic.twitter.com/8xUytYnDrc

#BREAKING @ChuckGoudieABC7 reporting the 1st victim in #MercyHospital shooting is a female doctor who was reporting for work, gunman is her former fiancé who forced her to ground & shot her multiple times, then went into hospital & kept shooting

I didn’t know Dr. Tamara O’Neal, the ER doc who was shot and killed at #MercyHospital today, personally. But here’s what we can presume about her, simply by dint of being an ER attending at a busy urban hospital.

The doctors saving lives after the shooting tonight at Mercy Hospital Chicago were told by the NRA just two weeks ago to "stay in their lane."

The doctors saving lives after the shooting tonight at Mercy Hospital Chicago were told by the NRA just two weeks ago to "stay in their lane."

2 women were shot; both are in extremely critical condition.

Sources told ABC7 that 1 of the women, who was shot in the parking lot, was a doctor at #MercyHospital & was shot by her former fiancé. https://t.co/8lcZkMQhk5

2 women were shot; both are in extremely critical condition.

Sources told ABC7 that 1 of the women, who was shot in the parking lot, was a doctor at #MercyHospital & was shot by her former fiancé. https://t.co/8lcZkMQhk5

Tamara O'Neal, the ER doctor killed by her ex-fiance at Chicago's Mercy Hospital, worked 2 full time jobs after college while preparing for medical school. She was also a mentor to at-risk youth. Read more about O'Neal's life and tragic death here: https://t.co/jzH74qYYMo pic.twitter.com/r9WwPVF22v

A shooting at Chicago's Mercy Hospital left 4 people dead, including a police officer, a doctor, a pharmacy technician and the gunman https://t.co/KzuemVocWP

RIP OFFICER: Samuel Jimenez, 28, was shot and killed during an active shooter incident at Mercy Hospital. He leaves behind a wife and three kids https://t.co/qD7wUqK40a pic.twitter.com/l2dqoMVK1A

Chicago's Mercy Hospital has been secured, police say, after a shooting that left an officer in critical condition and multiple people injured. The suspect was identified as a 32-year-old man. https://t.co/qMD4UrQN6C pic.twitter.com/NA1JkIYddk

Just heard a fellow emergency medicine doctor was among those shot at #MercyHospitalhttps://t.co/wOyV58rr0d

Dr. Tamara O'Neal, a physician in Chicago At Mercy Hospital, was shot six times today and killed by her ex-fiancee. pic.twitter.com/0dwqB9aGa2

Remember when the @NRA told doctors who talked about the patients they had to pull bullets out of to "stay in their lane"?

Reports of active shooter and multiple victims near Mercy Hospital in Chicago pic.twitter.com/rfHXXxKH8A

JUST IN: Here's the video of a witness recording what sounds like gunfire outside Mercy Hospital earlier today. pic.twitter.com/BZLXETWIIt

Shots were fired at a 2nd CPD officer in the Mercy Hospital Shooting, but he wasn't injured. Instead, the bullet struck his holster and embedded itself in his gun: https://t.co/hVPwgbrkXv pic.twitter.com/OvMI0ln3l6

Chicago police plan on giving an update soon after a shooting at Mercy Hospital left an officer and a "possible offender" shot. A witness told reporters the gunman seemed to be "shooting at random." https://t.co/tKu5H74c9R pic.twitter.com/NcGfP426pT

The latest on the #MercyHospital shooting in Chicago:
– At least one officer has been shot and is in critical condition
– Police are searching for more victims
– One possible offender has been shothttps://t.co/wGkAUOX8XP

This is Chicago Police Officer Samuel Jimenez. Jimenez was one of 3 people killed today at Mercy Hospital in Chicago. pic.twitter.com/a7LPRlAxdb

“We hid for a little while in one of the rooms and barricaded the door.” Witnesses describe scene after gunman reportedly opened fire on the campus of Mercy Hospital in Chicago. pic.twitter.com/5eqdn3ybZf

Juan Lopez, identified as the shooter who killed his ex-fiancee at the hospital where she worked as an ER doctor along with another Mercy Hospital employee and a Chicago police officer, was a DePaul grad and worked at the Chicago Housing Authority: https://t.co/lRSr2AZA6J pic.twitter.com/j3YCgMybMa

Dayna Less just graduated from a pharmacy program last spring and was planning a June wedding. She worked at Mercy Hospital as a pharmaceutical assistant and was shot dead as she exited an elevator. pic.twitter.com/7WqmujfG64

Our thoughts & prayers are with the family, friends & colleagues of fallen #ChicagoPoliceDepartment Officer Samuel Jimenez and all of the victims of the #MercyHospital shooting. pic.twitter.com/mw2fdM4ULO

Memorial outside of Mercy Hospital continues to grow for the two employees who were killed here Monday afternoon. @WGNNews pic.twitter.com/Bv1ArXihoi

Fellow officers salute as the body of Chicago policeman Samuel Jimenez, slain in the shooting at Mercy Hospital, is escorted to the Medical Examiner Office pic.twitter.com/kqpinARs9G

A Doctor, Police chief and Mayor of #Chicago brought to tears after a shooting at #MercyHospital that led to the death of a female doctor, a male pharmacy tech, male police officer & the gunman. pic.twitter.com/eLesHfxdPZ

Here is the photo of the gun that stopped a bullet at Mercy Hospital last night. The officer is alive because of this. #Chicago pic.twitter.com/S4k61dWiyS