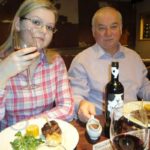 The Novichok (Russian: Новичо́к, “newcomer”) agents, a series of organophosphate compounds, were developed in the Soviet Union and in Russia from the mid-1960s to the 1990s. The Novichok program aimed to develop and manufacture highly deadly chemical weapons that were unknown to the West. The new agents were designed to be undetectable by standard NATO chemical-detection equipment and to defeat chemical-protective gear.

In addition to the newly-developed “third generation” weapons, binary versions of several Soviet agents were developed and were designated as “Novichok” agents.-Wiki

The couple taken critically ill in Salisbury over the weekend were tonight confirmed as being fresh victims of the novichok attack on Sergei Skripal and his daughter Yulia.

A major incident was declared in the city on Wednesday with several locations sealed off after Charles Rowley, 45, and his girlfriend, Dawn Sturgess, 44, became unwell with similar symptoms to the Skripals.

Authorities confirmed the substance they were exposed to was the nerve agent used in the attack against the Skripals in March.-Telegraph

‘Porton Down tests indicate Amesbury victims poisoned by #Skripal Novichok’https://t.co/2o4nOaYBTy
As with the Skripals, a ‘highly lethal nerve agent’ that produces (at least initial) symptoms more associated with an opioid, and consistently (and thankfully) so far fails to kill

The couple who suddenly collapsed in Amesbury, sparking a major police incident, are feared to have been “accidentally exposed” to a nerve agent https://t.co/pydsssGZjf

Mr Rowley is a registered heroin  addict and police and doctors initially thought the incident was drug-related. But four days after they fell into a coma, the alarm was raised when they failed to respond to treatment and it emerged they had spent several hours in the vicinity close to where the Skripals were poisoned.-Telegraph

Novichok AGAIN?! #Amesbury This is most strange.

“The two people have been exposed to the nerve agent Novichok” – UK police give update on man and woman found unconscious in Amesbury, Wiltshire https://t.co/ZURBif81ns pic.twitter.com/fD29Z8T0kl

The #Amesbury couple had visited Queen Elizabeth Gardens in Salisbury – now cordoned off. Investigators are trying to ascertain whether #Skripal Novichok was prepared there, and Amesbury couple came in contact with residue https://t.co/sRHpW4FAqw

Two Britons poisoned with Novichok nerve agent near where Russian spy was struck down https://t.co/isUYQ9GfKd

A couple who were left in a critical condition in Amesbury came into contact with the nerve agent Novichok, the country’s top counter-terrorism police officer has saidhttps://t.co/qOlfGqxSjp pic.twitter.com/XjOhgsOv5z

Skripal novichok may be behind new Amesbury poisoning https://t.co/2hFPhky3ih

Russia has nothing to do with this.

We don’t even know what Novichok is.

Novichok is something we didn’t produce despite our scientist (who got hit by a car) admitting we did.

Govt minister tells me that either (1) couple came into contact with novichok by accident, probably same batch that poisoned Skripals or (2) they were specifically targeted by the Russians to panic the civilian population. https://t.co/QYkhViBK2Z

Looks like their could be a serial Nerve Agent poisoner in Salisbury
Nearby #PortonDown has Novichok & a true investigation must be carried out, not blindly blaming #Russia like the last fiasco.

How is Russia? Did they brief you on the midterm strategy or the nerve agent attacks? Please tell!

U.K. Counter-Terrorism Chief says they were poisoned by Novichok, the chemical Russia used to attack Sergei Skripal and his daughter months ago.https://t.co/8bwu0NJXgs