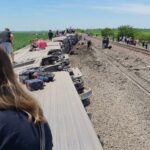 A deadly Amtrak train collision happened on Monday resulting in the death of three people and injuring dozens of others. According to CNN the train was travelling to Chicago and got derailed in Missouri 100 miles northeast of Kansas City. The train had about 243 passengers on board when it had a head-on collision with a truck at a public crossing.

One person was killed on the truck and two other people died on the train.

Cpl. Justin Dunn, with the Missouri State Highway Patrol, said at least 3 people were killed following an Amtrak train derailment. Officials say the train hit a dump truck at an “uncontrolled crossing” — that is when there are no lights or electronic devices that warn cars when trains are coming and are common on rural roads.

Dunn said two of the people who died were inside the train and one was inside the dump truck.

He said a total of seven cars derailed, and dozens of other people who were injured were taken to area hospitals. Dunn added that those who were not hurt were also transported away from the crash.

Officials say the investigation is in the preliminary stages and more information will be released as it continues. The Missouri State Highway Patrol says it is still working with Amtrak and the various other area agencies that responded to assist. -CNN