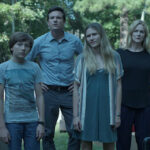 So what has Ozark been about all this time? Now that it’s over, we can look back on the story of a family who was willing to do anything to survive and could quite literally get away with murder. When Marty and Wendy chose to uproot their family and launder money for a Mexican drug cartel, they knew in their hearts that it would come with a cost. But it turned out that the cost was mostly paid by others. Think how few people have survived the orbit of the Byrdes. Go back over the seasons and the body count gets remarkable: Mason Young, Russ Langmore, Darlene Snell, Javi Elizondro. It’s been a show about a privileged family who always gets out of the car accident unscathed while the other driver isn’t so lucky. And the series ends with at least two more notable deaths: Omar Navarro and Ruth Langmore (and possibly Mel Sattem). A show that has always been deeply cynical ends with one of its darkest chapters in a lot of ways, suggesting that people like the Byrdes are untouchable. God help anyone who gets in their way. -Vulture

For anyone inclined initially to dismiss “Ozark” as “Breaking Bad Lite,” the Netflix drama has exceeded all expectations, steadily building toward a final run reinforcing the idea that getting into business with very bad people is going to have consequences. The fourth season has also become a family affair, adding a deeper hook to the Byrde saga that delivers tension right up until the last frame.Perhaps foremost, the series has consistently tested the extent to which Marty (Jason Bateman) and his wife Wendy (Laura Linney) are willing to go to survive, as they try to navigate landmines that include drug dealers and the Feds in order to shed their dirty money-laundering business and buy their way back to Chicago.Through the years, Marty has defined himself as the guy who can talk his way out of any situation, or at least try to, while Wendy has become increasingly ruthless, in a manner that has finally risked alienating their not-entirely-grown-up kids (Sofia Hublitz, Skylar Gaertner). In the “Who can you trust?” department, the Byrdes since the beginning have added each other to that calculus, but the question of whether they’re working together out of love or necessity seems particularly acute now. -CNN

Ozark’s final episodes (season four, part two) began streaming on Netflix NFLX-4.6% Friday. In the first episode of the last batch, Ruth Langmore (Julia Garner) does a memorable impression of Charlotte Byrde (Sofia Hublitz) while making a phone call and pretending to be the daughter of Marty and Wendy Byrde.

“I remember Julia called me that day when she was at work. She was in her trailer. I don’t think I was there but she called me and she was like, ‘Okay, so you’re going to laugh really hard,’” Hublitz recalled.

“She’s like, ‘It’s not me, Julia, making fun of you, Sofia, but there’s that scene where I have to say, This is Charlotte Byrde. We were laughing about it so much, but it’s not because of you, because it’s funny, because it’s Ruth, not me, Julia.’

“It’s funny because we all kind of had a laugh about that for a few days after she shot that. I mean, I don’t have the most melodic voice, so I think she did a pretty good job.”

Interestingly enough, Hublitz had also auditioned for Ruth before being cast as Charlotte ahead of the show’s launch in July of 2017. -Forbes

“Ozark” cinematographer Shawn Kim came aboard the show at the start of Season 4 with a good idea of what creators Bill Dubuque and Mark Williams wanted for the look of the dark thriller about a mob accountant and his family who relocate from Chicago to the Missouri Ozarks: A “sense of danger in the shadows,” Kim says.

“Ozark” fans have been waiting three months for the second half of the season to find out what happens to the Byrdes — Jason Bateman’s Marty, wife Wendy (Laura Linney) and their two children — as they try to wriggle free from the clutches of the drug cartel that employs him and the FBI that wants to imprison him. But Kim says the final seven installments, which drops April 29 and close out the Netflix series, are built around the ambitious Ruth (Julia Garner), who had worked for Marty and saw her world collapse around her at the end of the first half of the season. -Variety