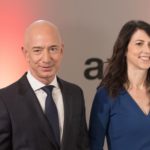 Amazon CEO Jeff Bezos and his wife, MacKenzie, are divorcing.

The billionaire executive and his wife of 25 years announced the news Wednesday — three days before his 55th birthday — in a tweet signed by both of them. They have four children together. -CNBC

Amazon’s chief Jeff Bezos is the first person with a net worth surpassing $150 billion in the 3 decades that Forbes has tracked the richest Americans.

He owns 16% of e-commerce colossus Amazon, which he founded in a garage in Seattle in 1994.

Bezos attended Princeton and worked at a hedge fund before quitting to sell books online.

His other passion is space travel: His aerospace company, Blue Origin, is developing a reusable rocket that Bezos says will carry passengers.

In Sept. 2018 he announced the Bezos Day One Fund, a $2 billion pledge to help homeless families and create Montessori-inspired preschools in the U.S. -Forbes