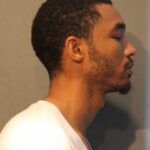 23-year-old Arvell Singeltary was charged on June 16th for the murder of a 23 year old female and the attempted murder of a 24-year-old male. Arvell is from the 5600 block of Dr. Martin Luther King Drive in Chicago Illinois.

According to Chicago PD Arvell was arrested on June 14th on S. Francisco Ave in the 8600 blocks. Arvell has been wanted since February 11th for the murder of a 23-year-old unidentified female and the attempted murder of an unidentified 24 year old male victim.