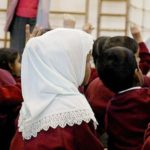 The “child protection law” will be drawn up by the summer according to the education minister, and will be a “symbolic act” in protecting Austrian culture from some Islamic influences.

It asserts that very few girls in kindergartens and primary schools in Austria wear a headscarf.

It is not clear how many children might be affected, particularly as many Muslims believe their religion expects a girl to start wearing a headscarf from puberty.-BBC

Austria's Sebastian Kurz, whose party is in government with the far-right Freedom Party, announces a headscarf ban in kindergartens and elementary schools https://t.co/jqj59DvzQy

Iranian women are physically fighting sharia while places like Austria, the president suggests every woman wear a Headscarf to end islamophobia. The irony HURTS.

Austria
The ruling coalition agreed in January 2017 to prohibit full-face veils (niqab and burka) in public spaces such as courts and schools. It said it was considering a more general ban on state employees wearing the headscarf and other religious symbols.

Imagine yourself just after giving birth.U pose happily for a picture in the press. Next thing u know, people call your baby a "terrorist" just because u wear a headscarf. It happened in Austria.Thankfully, a #flowerrain followed: https://t.co/RgcLIzP20B via @SalamPlan Photo: KAV pic.twitter.com/jXW1AIMG6T

Recent remarks by Austria's newly appointed Education Minister Heinz Fassmann against the headscarf have raised concerns for Muslims living in the country. https://t.co/lgLhZPTdcI

“if this real and rampant Islamaphobia continues, there will come a day where we must ask all women to wear a headscarf”
President of Austria, Alexander Van der Bellen. – not “far right” so that’s ok. #Austria #Kurz

Posted in News
← Shooter Identified in Youtube HQ shooting as Iranian. Act of Terrorism?Conor McGregor wanted by NYPD in relation to fighting UFC 233 members out of the ring →