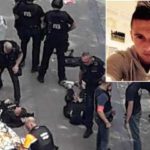 If only governments cracked down on Jihadists the same way they crack down on drug dealers.

“The gunman shouted Allahu Akbar – “God is greatest” in Arabic – and had taken a woman hostage at some point in the attack.” https://t.co/T6r3Q04Kcr

Man approached two female police officers from behind with a knife, attacking and disarming them, then used their guns to kill them both on the street.@ABC News' @JamesAALongman has the latest on the terror attack in Liege, Belgium. https://t.co/n4JML9zNZb pic.twitter.com/8T7EepjLGf

One of the policewomen killed today in Belgium was a mother of 13yr old twin girls.

Their father had already died, meaning the attack today has left them orphaned. Just awful.

?? #Belgium : Activists lay out 4,500 pairs of shoes in front of the #European Union in #Brussels to represent the number of Palestinians killed by Israeli forces in the last 10 years. pic.twitter.com/SBZNdSUNvL

The latest from Belgium as two police officers and bystander are shot dead pic.twitter.com/4S6BTQbaxT

Belgium. Now let me think… what was I called LAST WEEK for highlighting the festering terrorism in Belgium… ah yes, Islamophobic… https://t.co/3wMLkkrXGH

Attacker shouting 'Allahu Akbar' kills two policewomen and a man, then takes a school cleaner hostage before being shot dead in #Belgium while on DAY-release from prisonhttps://t.co/kBw2Wn3tcS#BelgiumAttack#FreeTommyRobinson pic.twitter.com/rkj28Tay82

A gunman was killed after he fatally shot two police officers and a civilian and then took a hostage at a school in the Belgian city of Liège, officials said. No students were injured. https://t.co/1lJxbS5r11

May my thoughts and prayers are with the people who where caught up in the attack in Belgium today. May my best wishes be with you all.

Yet another terrible loss of life. Childen left orphans. I can't help but wonder if all the media coverage encourages others #Belgium https://t.co/cVmy4kRIdJ