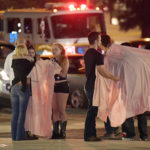 A Marine veteran clad in black and armed with a .45-caliber Glock handgun shot his way into a southern California bar crowded with college students where he unleashed hell before turning the gun on himself, officials said Thursday.

When it was over, 12 other people, including a police officer who tried to stop the carnage, were also dead and many more were wounded.

While investigators identified the gunman as 28-year-old Ian Long and tried to find a motive for the deadly mayhem at the Borderline Bar & Grill, once again the nation was forced to grapple with tragedy and embark on the all-too-familiar rituals of mourning after yet another mass shooting by a man armed with a gun. -NBC News

I, for one am shocked that the #BorderLineShooting was done by a white male. SHOCKED. pic.twitter.com/1Uce7LJPE3

Yeah, let's not jump to conclusions.
Over 300 mass shootings this year. #thoughtsandprayersnotenough#GunControlNow pic.twitter.com/hAkjmRasYQ

Gun massacres? "Oh, that's a very complicated problem with no easy solutions, you see, making them illegal won't stop a thing. You have to understand the nuances. In fact, actually…"#GunControlNow

.@realDonaldTrump has put more energy & resources into banning @Acosta than he has into keeping Americans safe from an epidemic of Radical Domestic Terrorism that is killing Americans in cold blood by the hundreds. #GunControlNow

Absolutely gutted. So many young lives lost. As a father of a Freshmen in college, I can’t imagine the pain of these parents. And, NO it is not soon enough to talk about #GunControlNow! Kids are being massacred across this country #BorderLineShooting https://t.co/ajH5gRV4Vc

Los Robles Hospital is in need of blood donors, especially those with O negative blood, for patients in critical condition. There will be a blood drive at La Reina High School, 106 W. Janss Road, from 10am-2pm. Appointments can be made by calling 877-25-VITAL. #BorderLineShooting

….Great bravery shown by police. California Highway Patrol was on scene within 3 minutes, with first officer to enter shot numerous times. That Sheriff’s Sergeant died in the hospital. God bless all of the victims and families of the victims. Thank you to Law Enforcement.

Mass shootings are happening so frequently in the US, we are becoming desensitized to their presence. Thoughts & Prayers aren't working. Not talking is no longer working.

#GunControlNow
If you’re not a psycho, a career criminal,or a spouse abuser violating a protection order, your hunting rifle is OK.

More Americans have died from gunshots in the last 50 years than in all of the wars in American history.

Ventura County sheriff says #Borderlineshooting suspect name is Ian David Long. He used a Glock-21 .45 caliber handgun with an extended magazine. No info on motive at this point. Devastating news from the #BorderlineShooting. College students out for a night of fun and music, slaughtered in a horrifying act of violence. It’s time for Congress to stand up to the NRA and say #Enough.

Absorb this number – say it outloud: 307 mass shootings in the 311 days of 2018.
We cannot accept this as our new normal. #Borderlineshooting https://t.co/FSdf80Woz4

FOX NEWS: Senator-elect, the #BorderlineShooting is deadliest mass shooting in the US since Parkland. What do we need to do to stop this?@MarshaBlackburn: "What we do is say how do we make certain that we protect the 2nd amendment?… mental health issues need to be addressed." pic.twitter.com/9ZYSlsajkT

Whether at a movie theater, a mall, a school, praying in a church or synagogue, or dancing at a bar, no one is safe in the U.S. from someone who wishes to do harm and can legally purchase an arsenal of firearms. Nothing is being done. Only thoughts & prayers. #BorderlineShooting

It’s absolutely heart-wrenching to listen to #borderlineshooting victims’ families describe their loss. Life is fragile. Take a second today to tell a loved one what they mean to you. Or even better, a break to just hold them. pic.twitter.com/T1y4uOTDtO

"The US makes up less then 5% of the world's population but holds 31% of global mass shooters. " #GunControlNow prayers out to those peoples family pic.twitter.com/z0sW6LyTEp

California already has some of the strictest gun laws & that didn't stop 12 from being killed. #CaliforniaShooting

12 killed, including the ‘good guy with a gun’, plus survivors of Las Vegas shooting. We can’t go on like this. I don’t want to hear about thoughts and prayers. I want #GunControlNow https://t.co/87edYxwjho

The massacre in Thousand Oaks is further confirmation the greatest threat to America is domestic terrorism perpetrated by white men. Unfortunately, this horrific reality will in no way deter white nationalist Trump from continuing to stoke fear, hate and bigotry. #GunControlNow

#GunControlNow mass shootings should not be the norm! Law makers need to step up and fight not line their pockets with NRA funds! Stop the shootings! pic.twitter.com/VTbMLphMno

“The largest mass shooting in this country in 12 days. Let that sink in” #Borderlineshooting pic.twitter.com/VzPWim7XlO

Los Robles Hospital is in need of blood donors, especially those with O negative blood, for patients in critical condition. There will be a blood drive at La Reina High School, 106 W. Janss Road, from 10am-2pm. Appointments can be made by calling 877-25-VITAL. #BorderLineShooting

Ventura Country sheriff's sergeant Ron Helus confronted the California shooter and stood between the bullets and college students as the gunman opened fire on the crowd.

My cousin’s son was killed at Pulse Nightclub. She’s told me about the pain of that day & every day since. As we awake to news of the horror of #Borderlineshooting, we have to answer why this continues happening so often in America? We cannot allow this to be our new normal. pic.twitter.com/gNOpVWPOzE

We are heartbroken by the loss of 12 innocent people in last night’s #BorderlineShooting, including Sheriff’s Sgt. Ron Helus. Americans deserve action to end the gun violence epidemic & @HouseDemocrats will work to pass commonsense solutions to save lives. https://t.co/iIzsz2melm pic.twitter.com/CcIYlRYCak

HOW TO HELP: Blood drive being held today at La Reina High School in Thousand Oaks to help victims of #BorderLineShooting https://t.co/uweRwFwFa4 pic.twitter.com/UGALf3dNUg

So many young & innocent lives were lost. ? My thoughts & prayers go out to the victims, their families, and their community. ?? Rest In Peace to the victims and stay strong Thousand Oaks. ?