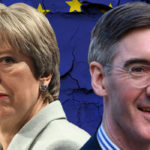 Jacob Rees-Mogg has submitted a letter to Sir Graham Brady, chair of the 1922 Committee, requesting a no-confidence vote in  Theresa May. Rees-Mogg, who rejected May’s Brexit deal just moments after it was published on Wednesday night, told reporters ‘this is nothing to do with personal ambition’ -TheGuardian

Jacob Rees-Mogg: “This is not a coup” pic.twitter.com/jQzxsVP9KI

Due to the fact May will now be able to have her next cabinet meeting in a Robin Reliant, we are now having to play reverse Tory Bingo. Got a line or four corners of Tory Ministers who are actually still left in Mays Cabinet, please call HOUSE! #BrexitChaos #BrexitAgreement pic.twitter.com/qksSyXC9Y7

"Coup is the wrong word… what has been achieved today is not Brexit" – Tory MP Jacob Rees-Mogg, who has submitted letter of no-confidence in Theresa May over draft #Brexit deal https://t.co/ncEsM9o6Jm pic.twitter.com/rKeo4yBVtG

Anyone want to guess who the next resignation will be from the #Tory cabinet?

Anyone know who the bookies have as the favourites?#BrexitChaos

For the twentieth time @Jacob_Rees_Mogg,
how much are you and your cronies set to gain from a hard Brexit?

I am really enjoying the meltdown from the Brexit politicians. They keep saying things which prove Brexit is harming the country. I'm here just collecting video clips like a kid at a toy shop!#BrexitChaos pic.twitter.com/ohLgkicbHy

WATCH | @Jacob_Rees_Mogg warns May that he is submitting his letter of No Confidence and demolishes her Withdrawal Agreement. "What she says and what she does no longer match!"

at times of national crisis I always turn to @loosewomen who are currently telling the public how to eat a banana like a royal #BrexitChaos pic.twitter.com/6LbZRwYZaQ

In these turbulent political times I’d like to remind everyone that Jacob Rees-Mogg is the same age as Paul Rudd. pic.twitter.com/2dhmw3vzJs

"If nothing else works, a total pig-headed unwillingness to look facts in the face will see us through"#Brexit #BrexitChaos #BrexitAgreement #BrexitShambles pic.twitter.com/ylrgP65E2C

"You know, I’m not much on speeches, but it's so gratifying to leave you wallowing in the mess you've made. You're screwed, thank you, bye." #BrexitChaos pic.twitter.com/9sRSTt6r60

Jacob Rees-Mogg the out of touch hypocrite that he is claims today he wants us to have a Hard Brexit so it'll make food cheaper for us plebs.
He thinks Bread costs £5 a loaf !pic.twitter.com/hULZqgenwV

There's no way Jacob Rees-Mogg hands in his letter of no confidence unless he is 100% sure he has got the numbers to make it happen. It's definitely happening imo. Strap in.

Jacob Rees-Mogg is to submit a letter of no-confidence in the leadership of Theresa May, a European Research Group spokesman says

Current mood…. "Go to the Winchester, have a nice cold pint, and wait for all of this to blow over" #BrexitChaos ?‍♀️ pic.twitter.com/72jnp99g4k

Jacob-Rees Mogg pictured earlier today on his way to deliver his letter of no confidence #BrexitChaos pic.twitter.com/by1VO6OMdE

This isn't a parlour game. It's real people's real lives.

No one voted for this #BrexitChaos. Why won't she deliver a #PeoplesVote?

My question for the Prime Minister pic.twitter.com/SLaF6LEruv

Make no mistake, we came to this desert called Brexit where nothing can grow and no ordinary person can prosper because of the arrogance and greed of the entitled class. #BrexitChaos

Surely at this moment of national disintegration, the one thing we can all agree on is that David Cameron should be hunted down and euthanised by a pack of rabid dogs? #BrexitChaos

Will the last one to leave the Cabinet please close the door behind them #BrexitDeal #BrexitChaos pic.twitter.com/2QV5qmoMP1

BREAKING – Mogg has handed his letter into the 1922 committee. Almost certainly at (if not above) the magic 48 needed to trigger a leadership election now.

It's time for true leadership, it's time for Jacob Rees-Mogg.#MoggMentum pic.twitter.com/JpenCohXOH

This is a bad deal which isn't in the interests of the whole country. #WithdrawalAgreement #BrexitChaos pic.twitter.com/vfUK2DgGUY

John Lewis advert: The childhood teddy of Jacob Rees-Mogg wakes up in 2018 at the back of a cupboard, makes its way to a TV and sheds a tear while watching the news. Builds a time machine and goes back and suffocates Mogg. Painfully slow version of Last Christmas, sung by Adele pic.twitter.com/FhqjQZxUqP

Jacob Rees-Mogg now being drowned out by the Stop Brexit man. pic.twitter.com/xZvaA8R6VD

Finally, an hour into the statement on EU Exit Negotiations, a single Tory stands and supports the PM #BrexitChaos