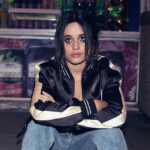 Who says you have to crowd into a stadium to hear your favorite musician play? Thanks to technology, the concert has experienced an overhaul. Case in point: Camila Cabello’s latest endeavor, an immersive live experience on TikTok. Today’s Familia: Welcome to the Family event promises to take her fans on a tour of Cabello’s current realities—virtual and otherwise. At once a preview of her forthcoming album, Familia, and an overview of the star’s confident new style, the concert is her most ambitious project to date.

The technology behind the event is impressive. Created using extended reality XR tech, it allowed Cabello’s performance to be layered with digital environments to create a surreal feeling. “The way we did it with XR, the concert is part music video and part live show,” Cabello explains. “That meant we could be as creative and inventive as we wanted to be.” The step into an unexplored new world immediately made Cabello think of Lewis Caroll’s classic children’s books, but she didn’t want to draw inspiration solely from literature. “[The visuals] are a little bit like Alice in Wonderland, but it’s also just a snapshot of a vision inside my head telling the stories of the songs,” she says. -Vogue

The team created multiple rooms to tell those tales, each dedicated to a specific hit. Stylists Rob Zangardi and Mariel Haenn then matched the interior design of each space to a chic piece from the runways. “Each look was chosen according to the room,” says Cabello. “For example, “La Buena Vida” was very Spanish and mariachi inspired, so we chose a hot pink, tulle Carolina Herrera Bolero to create a modern take on Mexican style.” Likewise, the set dedicated to “Psycho Freak” sees the star transform into a Mugler bombshell thanks to a neon catsuit. The party segment kicks off with her wearing Saint Laurent’s burgundy latex cocktail attire. -Vogue

Though the looks chosen offer a brief overview of trends from the latest collections, Cabello also wanted the pieces she wore to reflect her principles. “I love being able to express myself not only in my music but also in my style, and sustainability is incredibly important to me,” she says. Sourcing pieces from Dutch designer Roland van der Kemp’s RVDK Couture collection, an ethically crafted range made from archival fabrics and textile factory waste, she added an environmentally conscious element to her concert wardrobe. “The RVDK couture makes sustainability look glamorous and sexy,” says Cabello. “[Still] my favorite piece was the upcycled Project Trashure Couture dress made from a mix of textile trash and felt with ‘digital does street art’ spray-painted on it.”  -Vogue

Airing live on TikTok at 4 p.m. PST tonight, then rebroadcast three more times throughout the week, the concert is sure to become required viewing amongst the platform’s 1 billion active users. Having that many eyes on a project ups the ante, but Cabello is most excited for her fans to see her kickstart a new era in music and fashion. “Every part of this process was a way to express my creativity,” she says. “I’m now in a place where I am excited to try new things while also figuring out how to be comfortable and put together in my everyday style. [In the concert] we cover every mood, and you’re going to feel that when you tune in on Thursday!” -Vogue