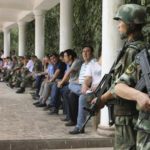 U.N. says it has credible reports that China holds million Uighurs Muslims in secret detention camps.
Why no Pakistani Maulvi or their Peer Baba Hafiz Saeed/Azhar Masood announce any #Fatwa or declare Jihad against Chinese People or Product??
https://t.co/hV14e9pHYU

“There is no such thing as re-education centers,” said Hu Lianhe, a senior Chinese Communist Party official.

Elderly Hui Muslim crying in prayer as he fears the Chinese authorities plans to demolish the Weizhou Grand Mosque in China pic.twitter.com/p7tCwKYtFI

China issued a blanket denial on Monday of accusations from United Nations experts that it had detained more than a million ethnic Uighur Muslims in re-education camps in the western region of Xinjiang.

Beijing has progressively tightened security in Xinjiang since an eruption of violence there in 2009, but the crackdown has escalated since 2016, when a new Communist Party secretary for the region began widely expanding security services and surveillance.

Gay McDougall, a member of the United Nations Committee on the Elimination of Racial Discrimination, spoke of the region on Friday as becoming “something resembling a massive internment camp,” with mass detention, re-education and disappearances.

At a hearing in Geneva on Monday, a 49-strong Chinese delegation met questions from the committee with flat contradiction.-NY Times

"Chinese authorities are persecuting people for using Muslim greetings, possessing halal food, or for having long beards or headscarves." https://t.co/XdIfkVZjhx

China has turned its Xinjiang province into “a massive internment camp, shrouded in secrecy, a sort of no-rights zone,” for over 1 million Muslims, says UN body. Western media & NGOs like Amnesty that slam other govts on human rights abuse give China (and Saudi) a free pass pic.twitter.com/2cCdvx31L0

WATCH: Thousands of Hui Muslims in #Ningxia flood into the square of Weizhou mosque for protest against #China govt violence demolition this newly-built mosque. pic.twitter.com/IXdnnBCiyl

Hundreds of Muslims are protesting against a plan to demolish the Weizhou Grand Mosque in north-western China. ? https://t.co/FUexx4nzUf pic.twitter.com/6MhOjKpYaS

It is holy Jummah today. Hui muslims tear off the seal of #china government and crowd into #Weizhou mosque for prayer. The protestors express they will protect this great masjid from government’s demolition throughout night.
Allah akbar!
May Allah bless all muslims.#反清真运动 pic.twitter.com/YtxiMNQOfv

China vehemently denies allegations that one million of its mostly Muslim #Uighur minority are being held in internment camps, insisting all ethnic groups are treated equally https://t.co/sVPW3e4EQM #Xinjiang

An hour ago I was up on @BBCWorld TV talking about the Chinese government denial at the UN that it’s running a network of political indoctrination camps for ethnic Uighur Muslims. The latest hour the censors quicker off the mark and screens across #China sent to black. pic.twitter.com/hBY3P9iaBq

As China "disappears" some million Uighur Muslims into "reeducation" camps, it is generating anxiety among relatives around the world. https://t.co/rBZtKpznvq pic.twitter.com/q6ydeJAb1V

First-of-its-kind courtroom testimony here has corroborated allegations that the Chinese government has built a network of internment camps in western #China where Muslim minorities are held without charge for forceful “reeducation.” https://t.co/1OFwFdk21E

The fate of the Palestinians or the Rohingya stirs rage and resistance throughout the Muslim world. Millions condemn the persecution and rally in their support.
But when it comes to the Uighur, there's deafening silence.

Government of #China at a United Nations hearing has denied allegations that a million + Uighurs and other muslims are being held in re-education camps… also denies that the camps themselves exist.