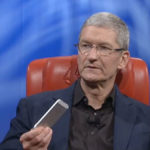 Apple has had its first whiff of legal action over its shock revenue downgrade on Wednesday, with New York law firm Bernstein Liebhard trying to garner support for a class-action lawsuit on behalf of shareholders.
In a press release on Wednesday, the law firm wrote: “Bernstein Liebhard LLP, a nationally acclaimed investor rights law firm, is investigating potential securities fraud claims on behalf of shareholders of Apple… resulting from allegations that Apple and/or its executives may have issued materially misleading business information to the investing public.” -Bloomberg

It asks Apple shareholders to join the lawsuit but isn’t clear whether the firm actually has any claimants as yet. Business Insider has contacted the firm for comment.
Apple revealed on Wednesday that its fiscal first-quarter revenue would be 7% lower than expected, coming in at $84 billion. It had previously predicted revenue between $89 billion and $93 billion. The company pinned the blame on falling iPhone upgrades and the slowing Chinese economy, among other factors. -Bloomberg

Hong Kong (CNN Business)From iPhones to autos, global brands rely on China for growth. Now the country’s economic slowdown is putting their earnings at risk.Apple (AAPL) on Wednesday said that it expected a weaker Chinese economy to hurt its holiday sales numbers, prompting its stock to plunge up to 8% in after hours trading. CEO Tim Cook said in a letter to investors that the company had been blindsided by “the magnitude of the economic deceleration” there.It isn’t the only company that could suffer. The slump in China’s economy, the second largest in the world, could hit companies like General Motors (GM), Volkswagen (VLKAF) and Starbucks (SBUX), which will report earnings in the coming weeks.”This year has the potential to be a tough year for western brands,” said Benjamin Cavender, a Shanghai-based analyst at consultant China Market Research Group. -CNN Business

A filing at the Taiwan Stock Exchange reveals Wistron has authorized its subsidiary in India to spend 30 billion rupees ($340.62 million), in order to expand and meet future demand for its services in the region. Currently the company has a paid-up capital of 1.8 billion rupees for its Indian operations, making the investment a considerable increase in resources.
For the Indian market, Apple still relies on imports to make up the bulk of purchases in the country not already covered by Wistron’s supply. Apple is likely to be hit by a proposed luxury goods tax, one that is designed to discourage imported goods and one that could be mitigated by increasing production in the region.  -AppleInsider

However, the vision for research in India of the Prime Minister and that of the Nobel laureates was quite different.

“Our scientists must commit themselves to addressing problems of affordable healthcare, housing, clean air, water and energy, agricultural productivity and food processing. While science is universal, technology must be local for providing solutions relevant to local needs and conditions,” said Modi. -Hindustan Times