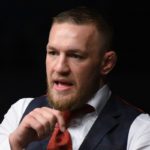 Mike Tyson went to jail for rape. Floyd Mayweather was arrested for domestic violence. Jon Jones hit a pregnant women with his car while intoxicated and ran away. Please quit acting like Conor Mcgregor is the most vile villain in combat sports.

Why didn't Khabib get off the bus?

Him and his Dagestani debutants where big enough to have a go at Artem, why didn't they go for Conor McGregor?

'Arrest warrant' out for Conor McGregor after attack on UFC bus in NYC
https://t.co/z7qpQiNCWz

The stuff with Conor McGregor ( @thenotoriousmma )today was masterful promotion. Makes his next fight even bigger than it would have been. pic.twitter.com/UoVUWYBeBp

Conor McGregor has been stripped of his UFC lightweight title.

Conor McGregor attack on rival outside of Barclays Center caught on video, UFC president says McGregor has been arrested https://t.co/teUoQZSZiM