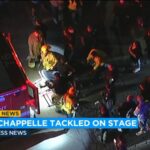 Dave Chappelle‘s Hollywood Bowl performance Tuesday night came to a temporary screeching halt when someone rushed the stage and attacked the comedian, and it was especially scary because we’ve learned the guy pulled out a gun.

It went down toward the end of Dave’s show — part of the “Netflix Is A Joke” festival — when a man in the audience somehow got on stage and manhandled Dave, tackling him violently and slamming him on the hard stage.

Law enforcement tells TMZ, the attacker actually pointed the gun at Chapelle as he rushed him. We’re told the gun was not real, it was a replica of a semi-automatic. It also weirdly had a knife attached to the gun. -TMZ

A man who police said was armed with a replica gun rushed a stage and tackled comedian Dave Chappelle as he was performing at a Los Angeles comedy festival late Tuesday.

The Los Angeles Police Department early Wednesday confirmed the attack, saying the weapon the man was carrying can eject a knife blade “when you discharge it correctly.” It is unclear if the fan made an attempt to use the weapon.

Several videos and accounts posted online showed the man climbing onto the front of the Hollywood Bowl stage and rushing toward Chappelle. At least one video showed the comedian falling to the floor, with several other people rushing to apprehend the person. -NBC Los Angeles

The motive for Tuesday night’s attack was not clear.

Chappelle’s recent comedy special caused controversy due to material about transgender people, which led to a walkout of Netflix employees.

“The comedian had literally just said he now has more security because of all the uproar from his jokes about the Trans community,” tweeted Buzzfeed News reporter Brianna Sacks, who attended the show. She tweeted that “while the attacker was getting beat up,” Chappelle “made a joke about him probably being a Trans man.” -CBC

The tackle was apparently not the only cheap shot that night.

Comedian Dave Chapelle has found himself in hot water with LGBTQ+ critics yet again after joking that it was a “trans man” who attacked him on stage during the now-viral assault Wednesday.

The 48-year-old “Chappelle’s Show” creator had been performing at the “Netflix is a Joke” festival in Los Angeles’ Hollywood Bowl, when an unnamed spectator bum-rushed the stage and tackled the comedian to the ground, as seen in shocking footage. The assailant —  Isaiah Lee, 23, of Los Angeles — was subsequently removed from the venue by security, whereupon he was arrested by the LAPD and taken to a local hospital for minor injuries. It was later revealed that Lee has been booked for felony assault with a deadly weapon.

Officer Lizeth Lomeli, a spokesperson for the LAPD, confirmed to The Post that the suspect was arrested for assault with a deadly weapon and the suspect, whose name will not be released until he is discharged from the local hospital, was carrying a replica handgun that had a blade inside. -New York Post