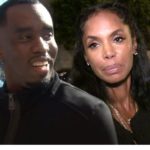 Kim Porter, who took her girls on a Girl's Trip. ?? pic.twitter.com/DXxEjJoU6D

Kim Porter, mother, actress and model, has died at the age of 47. https://t.co/8uz9RNikrt pic.twitter.com/rC46QIX4tK

Diddy Is 'Devastated and Shocked' About Ex Kim Porter's Death at 47: 'They Were Still a Family' https://t.co/edUvLjWIvJ

RIP to Kim Porter. She had pneumonia that weaken the heart and died from cardiac arrest! Gone too soon !#RIPKimPorter pic.twitter.com/X4eSIJH9S9

Porter was 47.
“Sadly, I can confirm the passing of Kim Porter. I ask that you give the families privacy at this time,” Combs’ publicist Cyndi Berger said in a statement.
Porter was found dead in her Toluca Lake home on Thursday morning, the Los Angeles County medical examiner’s office said in a statement. No information about the cause of her death was released.
Porter and Combs were a couple for more than a decade until 2007. They had twin daughters and a son together. Porter also had a son from a previous relationship.
News of Porter’s passing elicited heartfelt condolences from across the entertainment industry.
“This is so heartbreaking. Lord please give her kids & her whole family strength,” Missy Elliott wrote on Twitter.
Curtis “50 Cent” Jackson also took to Twitter to voice his grief. “R.I.P to Kim Porter, I send my condolences to her friends and family. She was loved and will be missed dearly,” he said. “I know Puff is hit right now, he loved her for real, soul mate type sh–. Chin up puff, Positive vibes only.”
Beyond her modeling career, Porter made several film and television appearances over the years, including roles in “The Brothers” and the TV series “Wicked Wicked Game.”-CNN

Rest with the angels, Kim Porter.

RIP Kim Porter! My heart breaks for your beautiful children and family. pic.twitter.com/tjvnWuXp3B

Kim Porter Dead at 47: Everything to Know About the Model, Mom of Four & Sean 'Diddy' Combs' Ex https://t.co/i6sfznwAIu

#KimPorter was reportedly battling pneumonia for weeks, treated with saline and vitamins before death https://t.co/CUz1T25aaJ pic.twitter.com/gIm4OAMybO

At 47 Kim Porter, supermodel, actress, socialite and mother of 4 has passed away https://t.co/38mvgPgGYT pic.twitter.com/NkcqO3Uu4Y

FROM AFRICA??: Just SPEECHLESS! Kim's DEAD! Thank u for the memories. I was featured in the same issue of #Atlanta Woman #MissPharmaMedia. Cassie hope you can marry @Diddy now? Janice pls take care of D'Lila, Jesse, Christian, Quincy and Justin too. #RIP my friend Kim Porter?? pic.twitter.com/aw8lAPAIfB

R.I.P Kim Porter. Prayers for her family and children ???? pic.twitter.com/yHIhCZKv6B

My heart just aches so much 4 her children??She Loved them dearly she was proud of her kids & they Loved their mother so much❤️ & Prayers for @Diddy during such a difficult time??? #KimPorter those that know you will always remember your SMILE your LAUGH
& KIND HEART?? pic.twitter.com/3FjrzWuBjr

?Forever My Lady
I say just what I mean,
Forever My Lady
I pray is what I see?
Kim Porter. A muse, mother, sister & friend. We at EBONY send prayers, strength & courage, with #EBONYLOVE ??https://t.co/4p7K7z2mZd pic.twitter.com/FPfKvbSqD9

Sources say that Porter was the "love of [Diddy's] life, and his very best friend."https://t.co/B365agCOBJ

One of the most horrifying things a mother can think of is leaving her children while they are young. My heart hurts so bad for Kim Porter and her family. Please be good and gentle to yourselves tonight, fellow mommies.

My heart is hurting for @Diddy and his family. In my brief interaction with Kim Porter she was nothing but a bright light. My family and i prayers goes up for her 2 twin daughters and her two sons. #RestInHeaven

I am absolutely wrecked by this news. Kim Porter was amazing human being one of the best moms I’ve ever met. Her disposition was always warm & fun
Just gutted for her children & family & everyone who loved her
Rest In Heaven, Kim
We’ll love up and support your family ??? pic.twitter.com/gBlBfNGOzU

I am absolutely wrecked by this news. Kim Porter was amazing human being one of the best moms I’ve ever met. Her disposition was always warm & fun
Just gutted for her children & family & everyone who loved her
Rest In Heaven, Kim
We’ll love up and support your family ??? pic.twitter.com/gBlBfNGOzU

The times spent with you and your family over the years will be treasured. Rest in power Kim Porter. My condolences to the Combs and Porter families. pic.twitter.com/rsc7bqyOYS

Kim Porter meant so much to so many , but to me and wondaland she was the woman who single handedly changed our lives .
When I moved to ATL , I was passionate about being an artist but… https://t.co/Enmfh3DUsc

?? RIP #KimPorter. This is truly sad and unreal ❤️ https://t.co/dzvH0TZSbz

Al B Sure wrote this for Kim Porter when he found out she was pregnant. pic.twitter.com/tvaGqCFISV

Kim, gone WAY too soon! It is unimaginable & devastating news. You blessed us all, especially your kids & beautiful family with such grace, elegance & sheer goodness. May you rest in peace in the embrace of the angels! #KimPorter #FamilyLove pic.twitter.com/kN6QTbUzLf

Kim Porter, Diddy's ex-girlfriend and mother of 3 of his children, dead at 47 https://t.co/tlzhPS6oKG pic.twitter.com/by9AbxvZ9F

There has been an outpouring of love and condolences from celebrities worldwide following the death of Kim Porter. #RIP ?? https://t.co/CgZdEFulI2

Authorities are investigating the death of Kim Porter, the former girlfriend of Sean "Diddy" Combs and the mother of 3 of his children. https://t.co/cATjr9P7vQ

Police 'rule out foul play' in Kim Porter death as distraught Diddy is pictured at her house #KimPorter #Diddy https://t.co/lPcxE5Le0r

Our thoughts and prayers go out to the family and friends of #KimPorter. #NOTEDbyBET pic.twitter.com/WZvaGuJIdF

Truly sad news about the death of Kim Porter. Love and light to her children, family and Puff. pic.twitter.com/cTB9lTMcil

Kim was always sweet and always showed love. My heart goes out to the Porter & Combs family… praying for strength and comfort to all of her beautiful babies & my bro @diddy. Rest In… https://t.co/mLIMxnqoT4

Drake sending his condolences to Diddy and his family after Kim Porter’s passing. pic.twitter.com/tsC1NMzRBv

Rest In Peace Kim Porter. May God cover your family in their time of grief. #RIPKimPorter pic.twitter.com/djS21W4xTv

I don’t really know what to say. I’m in complete and utter shock. So many memories are flooding through me. My heart & prayers go out to the children, Puff, her girlfriends that were like her sisters & all of the loved ones in her life. #RIP Beautiful Butterfly ????? #KimPorter pic.twitter.com/O9UGvkqVRR

Anyone who knows me will confirm Jodeci is my favorite group ever. And "Forever My Lady" is one of favorite songs ever. A dope fact I've always loved about that record is Al B. Sure wrote the song and dedicated to Kim Porter when he found out she was pregnant w/ their son Quincy. pic.twitter.com/QYT0gWqgSD

Kim Porter passing is crazy..
Like her kids ?
She was so young ya know..

Love on your love ones bc you just never know…

The gorgeous Kim Porter and daughters Jessie James and D’Lila also covered Jet Magazine in 2008. The mother of four, model & actress. This is all so sudden & at the young age of 47… Rest in paradise Kim Porter ??????https://t.co/isZ8qO8Ant pic.twitter.com/1iknnKBq9I

May Her Soul rest in peace.

This is a tough one. Model/actress and longtime girlfriend of P #Diddy #KimPorter has just passed away at the age of 47. Sources say she'd been suffering flu-like symptoms and possibly pneumonia for weeks. Condolence to her kids. Rest in power Queen??? pic.twitter.com/0bhbbm4AFe

RIP KIM PORTER, she always seemed so elegant to me pic.twitter.com/vlRsEvrczu

Statement from Kim Porter's rep: "Sadly, I can confirm the passing of Kim Porter. I ask that you give the families privacy at this time" https://t.co/mBqiIb3Rh5

R.I.P to Kim Porter, I send my condolences to her friends and family. She was loved and will be missed dearly. I know Puff is hit right now, he loved her for real, soul mate type shit. Chin up puff, Positive vibes only. pic.twitter.com/bck6eDal0M

You could see it in every photo with her kids how much Kim Porter adored her children and how much they loved her. I can't imagine losing your mom and best friend so unexpectedly. Praying for her kids and family. pic.twitter.com/i8UIcnKtBf

We are so sad to learn that actress and model Kim Porter has passed away at 47 years old. Our thoughts and prayers are with her children, family, and friends. May she rest in peace. pic.twitter.com/pcgZqHTLet

This Kim Porter news really has me shook. She was so young. Her twins are still very young. Right before the holidays. Just horrible.

Kim Porter was more than Diddy’s “baby mother.” She had a career and a whole life of her own

R.I.P. to Mother & Model, #KimPorter, who has passed at 47 after being sick with pneumonia. Our hearts breaks for her family ? Our deepest condolences to her family & friends. pic.twitter.com/i8uscCOykz

My prayers go out to Quincy, Christain, and the girls. I can't even imagine what they're going through right now.