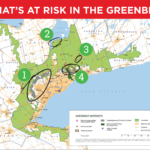 "Affordable housing": luxury homes that are more affordable for rich people to buy after we bulldoze the greenbelt.#onpoli #NotFord

The Progressive Conservative leader backed down one day after it emerged he had privately assured property developers he would “open a big chunk” of the 800,000-hectare swath of environmentally sensitive land around the Greater Toronto and Hamilton Area if the Tories win the June 7 election.

“There have been a lot of voices saying that they don’t want to touch the Greenbelt. I govern through the people; I don’t govern through government.”-The Star

Wow, the @OntarioPCParty platform is really coming along:

To be clear: we believe in protecting the Greenbelt. Anything we look at to allow for much needed housing development, we will do in a measured and sustainable way: we will add the equivalent land to the Greenbelt. That means there will not be an inch less of protected land.

#BREAKING: Liberals claim Doug Ford has made secret deal with condo developers to pave over greenbelt if electedhttps://t.co/r14sNILrvM pic.twitter.com/AjtRpAUpCg

Doug Ford has privately assured developers he will “open a big chunk” of the Greenbelt of protected GTHA farmland to build housing if the Progressive Conservatives win the June 7 election.https://t.co/T4NnMmThhP

Buildings are responsible for 1/3 of GHG emissions; the transportation sector another third. Building new affordable housing in transit-oriented walkable communities is the future, not sprawl where our greenbelt should be. Here, green affordable housing, by @RoseCompaniesNY. pic.twitter.com/a6P368qEm9

PC leader Doug Ford: "We will open up the Greenbelt — not all of it, but we're going to open a big chunk of it up — and we're going to start building and making it more affordable and putting more houses out there." #onpoli https://t.co/niqGDJp4bM

This is not the answer to affordable housing, but this move does show Ontarians that @fordnation will put his wealthy friends and donors before the people of Ontario. #onpolihttps://t.co/lsrWsAuaxr “When that land is gone, it’s gone forever. You cannot get that land back,” Wynne said at the Charles Hastings housing co-op on Elm Street where she was touting tenant protections.

Wynne noted there is already enough available “land in the GTHA to build two more cities the size of Mississauga” without tampering with the Greenbelt.-The Star

Video of Doug Ford promising to open greenbelt to development. Monday, defends what he said in video. Tuesday, changes his mind-"After consultation with the people of Ontario". How much consultation in a day?! #FlipFlopFord. Horvath, this election is yours to lose I think.#onpoli pic.twitter.com/vbHN1JlnnJ

Now that we all agree on the greenbelt …the bigger question in Simcoe County is:
Will the province be increasing population allocations to allow for more development?@jeffkerk @DougDownie1955 @fordnation @Kathleen_Wynne

Doug Ford’s about face on Greenbelt shows how bad he is but Kathleen Wynne’s about face on Hydro One compensation gets a pass. The @TorontoStar isn’t even trying to hide that it is an official @OntLiberal publication. https://t.co/BCod7lPLyE

Environmentalists warned any such tinkering would spell the end of the protected Greenbelt as developers renewed a speculative rush for farmland. The Ontario government and urban planning experts say there is already more than enough available land around the greater Toronto area for more than 20 years of development.-The Globe and Mail