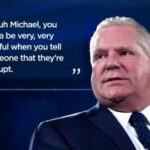 Ontario Premier Doug Ford has reversed this year’s cuts to municipal funding, including child care, public health and EMS, but future cuts will continue as planned.

“We’re a government that listens,” Ford told reporters outside his office at Queen’s Park Monday morning. “We’re going to give the mayors more time. We’re going to work with them.”

The Progressive Conservative government has been under increasing pressure in recent weeks over funding changes first revealed in its spring budget. The City of Toronto has said it’s losing millions in funding for everything from public health to child care to paramedics.

More than 31,000 people in Toronto signed a petition demanding the province reverse the cuts, which were revealed after the city passed its 2019 budget. -CBC