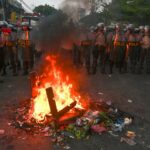 Six people have been killed and 200 injured during mass rallies in Jakarta against the re-election of Indonesian President Joko Widodo.

Indonesian police confirmed the death toll based on reports from hospitals. They said the cause of the deaths was being investigated.

Social media has been restricted in some areas to stop rumours spreading.

“Some had gunshot wounds, some had blunt force wounds but we still need to clarify this,” national police chief Tito Karnavian said, referring to the six dead, who are believed to have been killed overnight.

The authorities have said the protests were planned and “not spontaneous”. They have suggested that a group of provocateurs may have been responsible for the violence.

“A majority of the protesters came from outside of Jakarta,” said Muhammed Iqbal, a police spokesman. -BBC