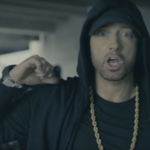 Last night I’m sure millions tuned in to B.E.T’s annual hip-hop awards.  Out of all the awards and all the amazing performances there seems to be one that stands out. Eminem’s explosive cypher has people raving. Mr. Slim Shady himself, did not hold back when it came to expressing how he felt about our president. With lines like, “we better give Obama props because what we got in office now is a kamikaze that’ll probably cause a nuclear holocaust.” Eminem let it be known that he was definitely  not a Trump fan. He displays his disgust  for the way Trump handles thing by making references to Puerto Rico. He also makes reference to  Trump’s  battle with the NFL. Eminem used his cypher to say the things that I’m sure most of us are thinking . He even goes as far as to tell his fans who are Trump supporters to choose between him and Trump.

Millions of people have hopped on Twitter in support of Eminem and what he had to say. One of those people being Kaepernick himself, he put out a tweet thanking Eminem for his support with ✊emoji in reference to the part of the cypher where Eminem put his fist in the  air and states this is for Colin. Now, I’m sure the whole world is on pins and needles waiting to see how Trump will respond . We all know he loves to go on Twitter rants.  I can’t wait to see what his “elegant and gracious” response will be to this one. As far as Eminem is concerned, this was an explosive way to make a come back. He’ll definitely go down in history for this one.  On the other hand Trump just may band his music forever.  Either way, he had a great performance with a powerful message