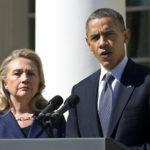 Suspected explosive devices were sent to former Secretary of State Hillary Clinton and former US President Barack Obama, the US Secret Service has said.

It comes two days after a bomb was found at the home of liberal philanthropist and financier George Soros in the suburbs of New York City.

The devices were discovered by technicians who screen mail sent to the former US officials.

The Time Warner building in New York was also evacuated due to a package.

CNN, which is located in the Time Warner building, evacuated its newsroom over the incident, CNN president Jeff Zucker confirmed in a statement. -BBC

CNN: Holy shit, they sent bombs to the Clintons, Obamas, and us.

MSNBC: Holy shit, they sent bombs to the Clintons, Obamas, and CNN.

Fox News: Found "suspicious packages", but we're not sure these devices were operational. Everyone calm down.

Police just closed down access to the entire block where CNN is located.

If this turns out to be an explosive device similar to the ones the Obamas, the Clintons and Soros received, you can draw a direct line to Trump.

He is culpable of promulgating hatred and violence. https://t.co/GrIh86NPko

Trump may not have personally mailed bombs to George Soros, the Obamas and the Clintons but his rhetoric and failure to address these disgusting acts are enabling this filth.

… and we are the “unhinged angry mobs”?

Sarah Sanders issues the statement below about the bombs that were just sent to Soros, the Clintons and the Obamas. The juxtaposition of this statement with her latest tweet from her official account says everything about what this administration is really fueling. pic.twitter.com/cK3ydBwwrJ

WATCH: CNN had to abruptly stop broadcasting from its studio in NYC while covering a story about bombs being sent to the Clintons and Obamas because an alarm suddenly went off about a "suspicious device" in the building.

BREAKING: Now CNN headquarters have been evacuated after receiving a suspicious package.

CNN now joins the Clintons, Obamas, and George Soros as victims in this horrendous attempt at domestic terrorism.

This is domestic right-wing terrorism.

BREAKING: Sunrise, Florida Police Department confirms an office building has been evacuated due to suspicious package in the mail. It’s the same building where the office of U.S. Rep. Debbie Wasserman Schultz is located – WFORhttps://t.co/FQG8Cv0ae7

I think it is wise to ask, a bomb sent to the Clintons, the Obamas, George Soros and CNN Time Warner, at the same time that the GOP says there are angry mobs on the left,is this a left wing false flag?

Hateful rhetoric has consequence. The bombs sent to the Obamas, the Clintons, and George Soros are terrifying and shocking. The President and others with platforms and audiences MUST take this moment to back away from the cliff and stop demonizing anyone who disagrees with them.

If you were trying to drive Democrats to the polls, you have succeeded.
Nothing gets us there faster than threatening Obama. https://t.co/iLTERU219y

Secret Service confirms explosive devices mailed to Bill and Hillary Clinton & the Obamas, a day after another was mailed to George Soros.

Which is why POTUS wants you to fear Middle Eastern terrorists hiding among Honduran drug war refugees at the Mexico-Guatemala border.

So far, pipe bombs have been sent to the homes of George Soros, the Clintons, and the Obamas.

Conservatives will scream 'false flag' about the bombs sent to the Clintons and Obamas, but let's be clear, 74% of domestic terrorism is carried out by right wing extremists: pic.twitter.com/2hYsnEdY0S

.@ShimonPro reporting on air for CNN, a suspicious package was also sent to the Obamas: "We're now getting word from the Secret Service that they also intercepted a second suspicious package that was addressed to former President Barack Obama." pic.twitter.com/RrarPEEPwV

Federal authorities investigating suspicious packages addressed to the homes of Bill and Hillary Clinton in New York and the Obamas' home in Washington, D.C. https://t.co/ZTCNVTLkvW pic.twitter.com/URWVAiqI1z

#BREAKING: Potential explosive devices addressed to the Obamas and Clintons were intercepted by the Secret Service. https://t.co/mRSPiZ9YNc Here's the full statement from the @SecretService. pic.twitter.com/YSQCwCsvuJ

I get your point, David but just a minor correction here:

Soros, the Obamas, and the Clintons didn't receive "bomb threats." They were sent actual bombs.

Fox News coverage of the pipe bomb is basically “We are seeing the mob mentality leading to this and who knows what the motive is?”

Hmm, CNN, Obamas and the Clintons. Pretty sure we know what the motive is.

The American way is engaging in civil debate & settling things at the ballot box. Violence and domestic terrorism have no place in our society. The perpetrators who targeted the Obamas, Clintons and the media must be held accountable & punished to the fullest extent of the law.

Stay away from the Obamas pic.twitter.com/Bjeyd2kNpZ

Sarah Sanders issues a statement for the White House because Trump himself doesn't give a fuck that the Obamas and Clintons are having bombs sent to their homes.

The Obamas and Clinton’s are not stupid. They’ll stop next to nothing to sway voters in Nov. but I can tell you. This is probably some liberal nut setting up opportunity for violence against the right. I in no way condone violence but the Dimms sure know how to set it up!

Find them, prosecute them, imprison them and throw away the key. The attempted massacre of Republican congressional baseball team, the attempted murder of Steve Scalise, the suspicious packages sent to Clinton, Obamas, CNN. It has to stop.https://t.co/quWxorrwca