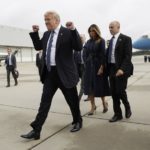 President Donald Trump does double fist pump on way to a 9/11 event in Shanksville. #September11th pic.twitter.com/5ydGQ34LEv

For everyone saying that @realdonaldtrump fist pumping at a 9/11 memorial is "nothing," remember that the right went crazy when @BarackObama wore a tan suit one day https://t.co/sQ1BqpPaVL

President of memes forever and ever.https://t.co/4W8H1mNZro

Twitter was told to do their "absolute worst," and they delivered. https://t.co/4xUp5TePIT

The MSM crawls lower every day. The MSM attacked President Trump over his fist pumps on 9-11 calling him inappropriate. However, what they neglected to mention or show in their pictures was his fist pumping was for a little cancer survivor of 9-11. pic that tells the true story. pic.twitter.com/d8sB47DAiC

Nixon and Trump masters of the pumps #FistPump #TrumpFistPump pic.twitter.com/kvpXMnr2Jo

..But the “no collusion” tweet and fist-pumps in PA took precedent. pic.twitter.com/VfAdIcEcsn

Well, I made this before I saw your png, but I'm happy! pic.twitter.com/8UIOawLu68