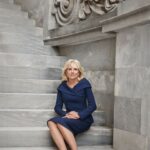 “Even as a Senate spouse, I was working, going to grad school, doing campaign events, raising kids,” she remembers. The pace is intense but not new. “Showing up matters,” she explains. “That’s the feeling I get. You’re exhausted. You just do it.” It’s a mantra that helps explain how a person who has recently returned from back-to-back funerals to remember men who died from a disease that still haunts her seems as energized as ever. -Jill Biden for Harpers Bazaar

“I was raised on valiant princes and star-spangled banners,” she writes in the book. “I believed that love conquers all, that justice would prevail. I don’t think I was wrong—not in the long run—but I soon realized a lot of the details had been omitted.” – Jill Biden for Harpers Bazaar

In the White House, she grimaces as she recounts it. “I believed so much in the institution of marriage,” she explains. “When the marriage fell apart, I fell hard because of that. And for him to turn out to be who he was …” She’s about to finish the sentence when, as if on cue, Commander barks and gets into a defensive crouch. -Jill Biden for Harpers Bazaar

“I knew I would never, ever put myself in that position again—where I didn’t feel like I had the finances to be on my own, that I had to get the money through a divorce settlement,” Dr. Biden says. “I drummed that into [my daughter], Ashley: Be independent, be independent. And my granddaughters—you have to be able to stand on your own two feet.” -Jill Biden for Harpers Bazaar

“I will keep talking about childcare and pushing childcare and hoping that we get it,” she says. “Families need it—not just women. I hear that all across America.” -Jill Biden for Harpers Bazaar

“There was an event [at the White House] last night—Senate spouses,” she says. “And one of the spouses—one you would never imagine—came up and said, ‘I have a friend who has what your son had.’ I said, ‘Let me write to her.’ I never probably would’ve made small talk, but yet here was something.” She will find time to write the letter. She’ll make a dent in the proverbial stack of books at her bedside. She’ll call the people who need her. “I wish I knew the actual secret,” says Doody. “I’ll say, ‘Jill, you have to watch Belfast.’ She says, ‘Oh, yeah. I saw it.’ I’m like, ‘What?’ I’m like, ‘Jill, you have to watch CODA.’ ‘Oh, I saw it. It was great, wasn’t it?’ ‘Jill, have you read The Vanishing Half?’ And she goes, ‘I love that book.’ ” Doody continues, “I say to her, ‘Jill, I can’t believe how you do this. You’re so busy!’ She says, ‘Mary, everybody is busy.’ ” -Jill Biden for Harpers Bazaar

“Really!” Dr. Biden says, awed. “I’m going to be raising a teenager?” She’s just been holed up with her sisters at Camp David to celebrate a birthday. “We had our martinis and just laughed, and it felt great,” she says. Sometimes people will ask them what it’s like to have Jill Biden as a sister, a question as obvious as it is hilarious. She’s their older sister—teased, beloved, admired, revered. Dr. Biden mimics their faux horror: Please! “She’s just Jill.” -Jill Biden for Harpers Bazaar

It’s a somber note, and she strikes it. But before she steps down from the podium to mingle, she swerves with an ad-lib: “You can yell at me or you can say kind words—it’s up to you!” The crowd laughs, and the mood loosens. -Jill Biden for Harpers Bazaar

Posted in Entertainment, Entrepreneur, News
← Shaunie O’Neal and Keion Henderson tie the Knot in AnguillaTwo men were arrested in Robbery Investigation one man is still at large in Toronto →