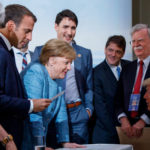 In the province of Quebec, where the G7 summit was held, we have universal day care with a user fee of $7 per day.

Your child was poorly behaved, petulant and displayed signs of bullying.

Thank you for picking him up early.

And a special thanks to the teams who kept everyone safe at the @g7 Summit. pic.twitter.com/RNPFgT1qEq

US President Donald Trump has continued his personal attacks against Canadian Prime Minister Justin Trudeau, tweeting that he “acts hurt when called out”.

That statement had sought to overcome deep disagreements, notably over trade.-BBC

Our media is giving Trump exactly what he wants: covering the stagecraft of the Singapore summit-even tho Trump has not prepared and has only elevated Kim Jong Un-as if he were some sort of statesman and normal after he stormed out of the G7. You are failing the American people!

If you can read this article, as an American, and not feel embarrassed, I would be shocked…https://t.co/E6TkUrZ95r

Mr Trudeau has vowed retaliatory action next month over US tariffs on steel and aluminium.

The tweets Mr Trump posted after the G7 contained direct attacks on the Canadian PM.-BBC

Fair Trade is now to be called Fool Trade if it is not Reciprocal. According to a Canada release, they make almost 100 Billion Dollars in Trade with U.S. (guess they were bragging and got caught!). Minimum is 17B. Tax Dairy from us at 270%. Then Justin acts hurt when called out!

Meetings between staffs and representatives are going well and quickly….but in the end, that doesn’t matter. We will all know soon whether or not a real deal, unlike those of the past, can happen!

With diplomatic tensions between the U.S. and Canada rocked by recent comments about trade by President Donald Trump and his advisers, some Americans are finding ways to acknowledge Canada’s other exports in popular culture.

From Neil Young and Joni Mitchell to poutine and northern hospitality, many of Canada’s internationally known trademarks became fodder for compliments on social media using the hashtags, #ThankCanada and #ThanksCanada.-CBC

Sorry, we cannot let our friends, or enemies, take advantage of us on Trade anymore. We must put the American worker first!

Great to be in Singapore, excitement in the air!

….Germany pays 1% (slowly) of GDP towards NATO, while we pay 4% of a MUCH larger GDP. Does anybody believe that makes sense? We protect Europe (which is good) at great financial loss, and then get unfairly clobbered on Trade. Change is coming!

….And add to that the fact that the U.S. pays close to the entire cost of NATO-protecting many of these same countries that rip us off on Trade (they pay only a fraction of the cost-and laugh!). The European Union had a $151 Billion Surplus-should pay much more for Military!

Why should I, as President of the United States, allow countries to continue to make Massive Trade Surpluses, as they have for decades, while our Farmers, Workers & Taxpayers have such a big and unfair price to pay? Not fair to the PEOPLE of America! $800 Billion Trade Deficit…

“I just want to make a note of apology for the idiotic behaviour of my president,” De Niro said, winning big cheers from the dozens who turned up for the groundbreaking ceremony.-CBC

– North Korea summit falling apart
– Kim playing Trump like a fiddle
– Dennis Rodman can’t save him
– Trump dozed off in G7 meetings
– We told you his health is failing
– Trump has no friends
– Maybe he’ll make friends in prison
– It’s still only 4:45pm

Over the past three days, we’ve been working with leaders to build a healthier, more equal world with stronger economies that work for everyone. More on what we accomplished at #G7Charlevoix: https://t.co/dPTLBYP4px

China hosted the SCO summit,which is an alternative to the G7. The SCO was attended by Russsia,India,etc.
after the meeting China made avaible R50 Billion to be invested in countries that attended.
Guess which one did SA attend,the G7.
How much was made available after G7?
Zero! pic.twitter.com/iRziEd0NV8

Trump went to G7 Summit to advocate for Russia. If any other President had done that they'd be called a traitor. #TheView

Heading home ?? after a very productive engagement at the #G7Summit in Québec, Canada ??. The @g7 Summit offered an opportunity to discuss matters that are important to Kenya, Africa and the global community. #G7Charlesvoix #KenyaAtG7 | https://t.co/UMbH8SbL9P pic.twitter.com/j1zY34F4KB

“Meek and mild”
"Dishonest & weak"
“Stabbed us in the back”
“Special place in hell”
… These are some of the statements Trump and his inner circle used to describe Canadian PM Justin Trudeau after fallout from the G7 summit https://t.co/7n1fIt4Jo1 pic.twitter.com/kDB1HioYsS

"This was the worst foreign policy outing that Trump has had since he became president…it was the geopolitical equivalent of the Comey firing. It was Trump unable to control his emotional impulses," says @IanBremmer about the dramatic G7 summit pic.twitter.com/0iu8tkgvvl

Theresa May was asked about the Arron Banks leaks at the G7 summit in Quebec and said: “I am sure that if there are any allegations that need investigation, the proper authorities will do that.”

(But meanwhile I will deliver Brexit however flawed, harmful, broken, wrong it is)

"This was a difficult summit with, at times, some very candid discussions" – PM updates MPs on recent G7 summithttps://t.co/uN1pz6Ln6b pic.twitter.com/r6MlPi8vcj

Physical toll and stress: Trump turns 72 on Thursday; oldest-first term president ever. Jet lag from 10,000 mile Singapore trip, no preparation (he admits), plus strain/anger over failed #G7 summit – other leaders accuse him of “little words” and “incoherence”