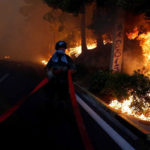 Survivors of the wildfires that have killed at least 74 people in Greece have described how they were forced into the sea by a blaze that “struck like a flamethrower”.

“The flames were chasing us all the way to the water,” said one victim.

Meanwhile, the bodies of 26 adults and children who apparently died hugging each other were found close to the sea.

As the search for missing persons continues, a website has been set up to help relatives trace their loved ones.

Hundreds of firefighters have been battling the flames, which have been fanned by winds of up to 60mph (100km/h) and have devastated the seaside village of Mati, engulfing homes and vehicles.-BBC

#UPDATE 50 people have died and 170 have been injured in wildfires ravaging the Athens region, as Greek authorities rush to evacuate residents and tourists stranded on beaches https://t.co/i3wouYWwpL #AthensFires #Mati pic.twitter.com/GQmUcryDeA

Breaking: Greek officials say wildfires death toll 'has exceeded 60 people' as a state of emergency is declared near Athens.

At least 20 people have died as two large wildfires continue to burn on the outskirts of Athens, Greek officials say. https://t.co/MGEx4qwmGP pic.twitter.com/t2ga2ec743

At least 20 dead and 100+ injured as wildfire sweeps through resort town in Greece. https://t.co/9pxLCMIktd – @Reuters

“Mati doesn’t even exist as a settlement anymore,” one woman told Greece’s Skai TV. “I saw corpses, burned-out cars. I feel lucky to be alive.”

VIDEO: Aftermath of the deadly wildfire that ripped through the Greek seaside resort of #Mati, 40 kilometres (25 miles) northeast of the capital Athens #AthensFires pic.twitter.com/bH5iOUqefg

Our thoughts are with people the Athens & our Greek firefighting colleagues who are battling wildfires that have sadly claimed the lives of around 50 people pic.twitter.com/MNd9NPr90o

At least 20 people died and more than 100 others were injured as a wildfire swept through a small resort town in eastern Greece, trapping many victims as they fled. https://t.co/HjKknP3Dmq

This type of behaviour against the Greeks is absolutely disgusting and humiliating, we do not condone this type of nonsense. Disgraceful! Where's the respect & sympathy?#PrayForGreece#PrayForAthens pic.twitter.com/1wgQ53Gdc6

At least 74 people have been killed in #wildfires raging close to Athens since Monday, a #Greek fire brigade official said on Tuesday.

Our thoughts are with those who have lost their lives, their loved ones and their homes in the wildfires in Greece. We're also thinking of our Greek firefighting colleagues who are battling to bring the fires under control. pic.twitter.com/DTVLY37HAj

Send our solidarity to greek citizens for the terrible wildfires, provoking death and destruction. A lot of public workers are engaged in rescue and security, trying to save human lives. We stay with them and by them, our brothers and sisters of @adedygr pic.twitter.com/IPCWEwnLq9

Over 70 people have died as major wildfires rage out of control around the Greek capital of Athens, forcing many people to flee by sea https://t.co/DUfNcwYaso pic.twitter.com/0mhff5HaNl

Greek wildfires kill more than 60 people. Greece has dealt with wildfires on a regular basis. Yet 2018 has been the deadliest year since 2007, when 84 people died and 2,700km² of forest were destroyed across the country. (video Eleana Balabani CCBYSA4.0) https://t.co/KC30seVtGV pic.twitter.com/LdlnZ5Lvga

Six friends fled into a rough sea to escape a fast-moving wildfire in Greece. Only four made it back. https://t.co/aXuCFVYh0o

Our thoughts are with our Greek firefighting colleagues who are battling a large #wildfire in #Athens. Please remember to be particular vigilant of outdoor fires in #EastSussex too and take steps to help prevent them from starting!

.@US_EUCOM: "At the request of the Greek government, the US Navy & Air Force are providing assistance with overflights in response to the wildfires." The Navy is providing a P-8A surveillance aircraft & the Air Force is providing a MQ-9 unmanned aerial vehicle out of Larissa

We can't talk about the Greek fires (or any wildfire really) without talking about the changed climate or where we choose to live https://t.co/2dXBPfcG4u

Horrible news about #Athens. At least 50 dead in #Greek seaside #wildfires, including 20 huddled near Athens beach. Cannot imagine how it would feel to stand to lose your home, your possessions, loved ones… #PrayForAthens #AthensFires pic.twitter.com/tQCxaSGHNM

It speaks volumes for the state of the Greek state when the first measures announced by the government for the victims of the wildfires are tax deferrals and exemptions.

At least 60 people have died after twin wildfires raged through popular seaside areas near the Greek capital, Athens. The wildfires are the worst Greece has seen since 2007, CBS News correspondent Seth Doane reports. https://t.co/3CnvXqLoYR pic.twitter.com/TRhtLx7cUa

Greek wildfires; Irish droughts and heatwaves in Japan, Africa and Scandinavia. Time for @DenisNaughten to smell the smoke and do more on #climate https://t.co/aQaBNm76jn pic.twitter.com/fWFT6WxLAr

Greek wildfires update: BA says passengers from Athens who want to come back early should call to discuss.https://t.co/VqfY03R8uD

Horrible news about #Athens. At least 50 dead in #Greek seaside #wildfires, including 20 huddled near Athens beach. Cannot imagine how it would feel to stand to lose your home, your possessions, loved ones… #PrayForAthens #AthensFires pic.twitter.com/dtDXcRb1kJ

Our second edition ⁦@EveningStandard⁩ with tragic news of 24 adults and children killed huddled together in the Greek wildfires pic.twitter.com/Y1FE5mYcH7

Greek wildfire kills dozens, more die in Japan's record heatwave & hundreds in extreme floods. Record heat internationally. Some might say it's a pattern worth taking radical action on, before becoming the new normal, or worse. Big dots not being joined. https://t.co/v4U6UA011j

RT @ABC: Drone footage shows wildfire devastation from the sky as at least 50 people are killed and more than 150 injured in Greece. https://t.co/m2eAIEA6eW pic.twitter.com/LFvOWYG0Ww

Israel has offered the Greek government assistance in combating the wildfires that are raging across the country and have put rescue teams on alert, in case they are needed pic.twitter.com/OdM8WgOB8s

Most of the victims were trapped in the village of #Mati, 40km (25 miles) north-east of #Athens, and died either in their homes or their cars. This village in the Rafina region is popular with tourists. https://t.co/iePXKgit6e #Greece #AthensFires

Posted in News
← Ryan Lochte in hot water over IV he posted to social media#ElectionResuts Pakistan: Over a dozen people killed outside polling station →