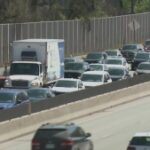 According to Ottawa Police Guns and Gangs Unit there is an ongoing investigation into a shooting that took place on May 12th on the Westbound part of Highway 417 near the Parkdale Avenue exist in Ottawa. The incident took play at around 1:20 p.m.

Two people were seen by hospital staff in relation to non-life threatening gunshot wounds. The two victims were later identified as a 25 year old man and woman who were released from hospital after treatment for their injuries.

Police have stated that there was a gunfire exchange from two vehicles on the Westbound lanes of Highway 417. The shooting believed to be premeditated and targeted involved a white Mercedes vehicle that police have yet to locate. The two victims who were picked up at hospital by the Ottawa Police did not want to cooperate with the police Guns and Gangs Unit.

Police are asking for anyone who may have seen the incident to come forward. Police are also asking for information on the two victims that could lead to a possible arrest.

Anonymous tips can be submitted by calling Crime Stoppers toll-free at 1-800-222-8477 or at crimestoppers.ca.

The Westbound Queensway was closed from Metcalfe to Carling Avenue of May 12th after the shooting.

In April of 2022 the Province released a plan to widen Five km of Highway 417. The project is part of a transportation plan that intends to extend the lanes of the highway to four lanes both ways. As past of a separate plan the Ottawa District also intends to run the LRT Line alongside the highway. There has already been an estimated $47.5 million dedicated to the construction and extension of the highway infrastructure plan.

The infrastructure plan is intended to quell grid-lock on the highway which the government see’s as less of a problem than the ongoing problems with the transportation systems in the suburbs of Ottawa or lack thereof. Construction and widening of the Highway is expected to begin in 2025.

“We as members of this community, including police, need to be concerned about all these events, not a focused-targeted event on the Queensway,” Hodgins said Friday afternoon.

“Whether it happens in a particular community, on a highway, on a pasture field out in Carp – these are all events that should be treated equally.

Some drivers say they’re concerned about safety following the incident, but the chair of the Ottawa Police Services Board tried to calm fears.

“I don’t believe the resident or driver should be concerned. The folks know each other,” Coun. Eli El-Chantiry said. -CTV News

Around the same time last year May 15th, 2021 there was a shooting near the Anderson rd exit of Highway 417 that sent an 18 year old man to hospital with non-life threatening gunshot wounds. According to Ottawa Provincial Police the received a 9-1-1 call after 11:30 p.m to respond to the shooting that was happening on the eastbound section of the highway. The highway was closed for 5 hours pending that investigation.