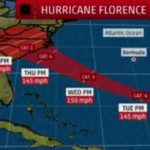 Airlines are allowing passengers to change their travel plans as Hurricane Florence spins closer to the U.S. East Coast.

Hurricane Florence, currently a Category 4 storm with maximum sustained winds of 130 miles per hour, could hit the southeastern U.S. or mid-Atlantic region by the end of the week, according to the National Oceanic and Atmospheric Administration. Constant high winds of at least 36 knots, about 41 miles per hour, can prevent Federal Aviation Administration staff from servicing radars and radio towers, so some systems could be shut down preemptively, the agency said.

American Airlines on Monday said travelers whose plans could be affected by the storm will be able to change their travel dates without paying change fees, which can cost $200 plus a difference in fare, if they can travel between Sept. 10 and Sept. 19.

The waivers for Hurricane Florence cover 23 airports, including Charlotte Douglas Airport, American’s second-largest hub, where it has about 670 flights a day. So far, American Airlines flights have not been canceled due to the storm, the carrier said.-CNBC

To the incredible citizens of North Carolina, South Carolina and the entire East Coast – the storm looks very bad! Please take all necessary precautions. We have already began mobilizing our assets to respond accordingly, and we are here for you! pic.twitter.com/g74cyD6b6K

A little over a year after Hurricane Irma decimated Puerto Rico, #HurricaneFlorence is about to bear down on the continental United States. What's our illegitimate @POTUS doing? Panicking over @RealBobWoodward's book and praising himself. Godspeed to those in the hurricane's path

We're monitoring #HurricaneFlorence & its potential impact on our region & state, and I am receiving regular briefings from our emergency management team. I urge MDers to closely follow local forecasts for weather information & https://t.co/S6NmvDGRfq for official declarations. pic.twitter.com/K4C9UYM4ow

"North Carolina is taking #HurricaneFlorence seriously, and you should too. Get ready now." – Gov. Cooper. https://t.co/5tX7pk3rsJ

I continue to believe tremendous flooding is going to be major issue w/#HurricaneFlorence, particularly with elevated terrain inland in Carolinas..yet I, multi-degreed meteorologist/former AMS President, was called a fear monger by someone on Twitter yesterday for saying that SMH

I will be holding a press conference at 3:30 regarding #HurricaneFlorence and the actions we are taking here in Maryland to prepare for potential impacts: pic.twitter.com/Jn0OgnZjLR

We are in preparation mode for #HurricaneFlorence. pic.twitter.com/8WJMEBZeDO

The iconic Coburg Cow in #WestAshley just came down in preparation for #hurricaneflorence pic.twitter.com/ny6WKK7I3L

First evacuation orders have been issued for Hatteras Island ahead of #HurricaneFlorence pic.twitter.com/uUy5ycGg3D

As a storm chaser if you are chasing #HurricaneFlorence, I would bring enough supplies, food, water for more than a week of survival. Nothing more dangerous than a stalling TC. Bring your resources from outside of the impact zone. Residents/evacuees/EM will need all they can get

It’s Monday. This is what the grocery store shelves in Charlotte look like already. #HurricaneFlorence pic.twitter.com/wjbbUU5gzG

#hurricane safety is no joke. Did you know that #hurricanes are classified by wind speed? Here's a handy guide to help you understand how powerful these storms can be. #HurricaneFlorence pic.twitter.com/PIrF0BPj9h

Today My evangelical science advisor taught me that hurricanes are caused by gay marriage and not by different pressure systems colliding in the ocean. We will repeal gay marriage and save the country! More to come! #HurricaneFlorence

We got the #corn in just in time before #HurricaneFlorence. @Asgrow_DEKALB 67-72 was the best variety on our farm with a 10 bu/ac advantage over our farm average. #MyFarmMyYield #harvest18 pic.twitter.com/8ToPmCd8py

Is your family prepared for #HurricaneFlorence? If not, please review the attached checklist to help you get started! Stay safe, Hanover.

#HurricaneFlorence is gaining strength — now a Category 4 storm carrying winds up to 130 mph. Virginia and Maryland have announced state of emergency, as those along the SC coastline prepare to evacuate Tuesday. https://t.co/0L3WuJSzOv

JUST IN: @HarvestHopeFB is preparing to assist those impacted by #HurricaneFlorence. They just issued a CRITICAL NEED ahead of this dangerous storm. You can donate at https://t.co/UBu2EGMmIG @foxcarolinanews pic.twitter.com/pZB54I9Ovw

#HurricaneFlorence is in the Atlantic heading toward the East coast. See what you should have in place to protect your business and keep your customers happy. #BusinessContinuity #SDWAN #UC #NatlPrep #NationalPreparednessMonth @WEStormTracker https://t.co/aEYmPOQKu7 pic.twitter.com/7mV37cGW14

Wow! The view from space of #HurricaneFlorence is just breathtaking! #CloudPorn @GMB https://t.co/Y2TddcBts8

Too many people focused on category level and forget about the stall. If this thing stalls for 2-3 days over NC, that means no electricity, food, water for potentially weeks. Don’t wait for government to tell u what to do. #HurricaneFlorence

We did just an “outstanding” job in Puerto Rico that North Carolina definitely has nothing to worry about. Good luck! #HurricaneFlorence

I’m only getting mild rain from #HurricaneFlorence so I think this won’t be bad here, however if this hurricane really destroys my town- please don’t show up and throw paper towels at me.

I know it’s easy to make jokes about the hurricane as a way to lessen the anxiety. But as someone who’s lived through more than a couple hurricanes, most of which were below a cat 4, #HurricaneFlorence is not a storm to take lightly. Prepare. Evacuate. Stay safe.

#HurricaneFlorence be smart! Please….don't up being a dead idjit. #SouthCarolina coastline residents are being ordered to evacuate due to an almost certain death if you stay. and PLEASE …take your pets WITH YOU! pic.twitter.com/rz702H2glR

Tip: Another way to find shelters once they have opened is to text the word “SHELTER” and a zip code to 4FEMA (43362). For example, for the Wilmington, N.C. area you would text to 43362: SHELTER 28401 (Wilmington’s zip code). #HurricaneFlorence

Due to the mandatory evacuation of Charleston starting Tuesday, the City Market will be closed Tuesday. The Market will remain closed until the evacuation order is lifted. @WCBD #chsnews #HurricaneFlorence

The Storms in the Atlantic are very dangerous. We encourage anyone in the path of these storms to prepare themselves and to heed the warnings of State and Local officials. The Federal Government is closely monitoring and ready to assist. We are with you!