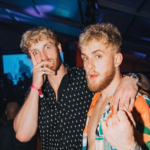 Forbes just released a report confirming that youtuber Jake Paul made an estimated $40 million in 2021. Jake Paul has had a short career due to him being only 25 years old but during that time the actor, musician, youtuber took to finding his niche and his career has skyrocketed since. Jake who is famously related to brother Logan Paul started his acting career in 2013. After being on YouTube for a short time he was signed to the Disney channel. Jake starred in the Disney series Bizaardvark for two seasons and was subsequently released from that contract.

After being released from his Disney Chanel contract in 2016 Paul went right back to you-tubing, creating a multimedia company that focused on marketing and investments: Team 10. A year later in 2017 Paul teamed up with the Iconic rapper Gucci Mane to release his first song Its Everyday Bro.

Forbes estimates that Paul raked in a combined $40 million before taxes from his three boxing victories in 2021, which ran his record to 5-0 overall. With an additional $5 million from his other endeavors, including his videos, Paul comes in at No. 2 on the list of the highest-paid YouTube stars for 2021, returning to the list for the first time since 2018.

That $45 million total would have landed him at No. 20 on last year’s Forbes list of the world’s highest-paid athletes, ahead of the only boxer to crack the top 50 of that ranking, Canelo Alvarez, who tied for 48th with $34 million. It also would have pushed him past established sports stars like Phil Mickelson ($41 million) and Novak Djokovic ($34.5 million). -Forbes

In 2018 after teasing to YouTube fans the urge to enter into the boxing world Jake booked his first fight with Deji Olatunji and won during the fifth round of that fight. Since then Paul has had 5 professional fights and he won all five fights. in 2019 Jake fought against fellow youtuber AnEsonGib. In 2020 after rescheduling a few times Jake matched up with basketball player Nate Robinson which led to an early knockout for Robinson. Jake also matched up with MMA champion Ben Askren which made an estimated $1.45 million in pay per view. In 2021 Paul had two fights which totaled his income of $40 million. His Opponent in 2021 was UFC Welterweight Tyron Woodley which Jake originally beat by a split decision that saw Paul as the winner with just over 2 points. Jake had a second fight with Woodley which he won after a 6th round knockout.

The channel is again generating ad revenue, and is up to 20.4 million subscribers, but he has continued to court controversy. The FBI raided his home in August 2020 after video showed him at a mall as it was being looted (he did not face charges), and among many inflammatory comments over the years, he called Covid-19 a “hoax” in a November 2020 interview with the Daily Beast. Most seriously, he was accused of sexual assault by TikTok personality Justine Paradise in April; Paul has vehemently denied the accusation. -Forbes

According to a source close to professional boxer Mike Tyson the pair are in discussions to put on a pay-per-view event that would be mutually lucrative for both boxers. Tyson who is 55 has been watching Paul’s career and may have started to notice the young professional on the rise after Jake called out both Connor McGregor and Floyd Mayweather. Although both boxers have yet to schedule a fight with Paul, Mike Tyson is eager to meet the young up and comer in the ring. According to Tyson both Logan and Jake Paul brought in an estimated 35 million viewers last year and Tyson would like to have a piece of that market.

The channel is again generating ad revenue, and is up to 20.4 million subscribers, but he has continued to court controversy. The FBI raided his home in August 2020 after video showed him at a mall as it was being looted (he did not face charges), and among many inflammatory comments over the years, he called Covid-19 a “hoax” in a November 2020 interview with the Daily Beast. Most seriously, he was accused of sexual assault by TikTok personality Justine Paradise in April; Paul has vehemently denied the accusation. -Forbes

“That is the fight for the money, those are the money-making fights, those guys got 35 million people to watch,” Tyson said last year.

The two have reportedly been close since Paul was a guest on Iron Mike’s podcast Hot Boxin’ last year. -Toronto Sun

Paul is reportedly dating owner of the ShagMag Julia Rose. The ShagMag is a subscription based magazine that you can purchase for $15 per month or a one time annual fee of $99. You can also catch up with Julia through her podcast The ShitShow available now on Spotify. The couple who both have a large social media following have not been shy about flaunting their relationship and for his birthday yesterday Rose shared an intimate photo of herself and Paul relaxing by the pool.

The ‘Problem Child’ is infatuated with his model partner and they often share raunchy snaps of them together for their fans on social media.

Since Paul knocked out Tyron Woodley last month, the pair have been inseparable with both of them celebrating their birthdays in recent weeks.

And they took their Instagram game to the next level for his on Wednesday, posing for a series of intimate pictures including one which saw Paul sinking his teeth into Rose’s backside in a swimming pool. -Daily Star

What is SHAGMAG? SHAGMAG is an all you can eat buffet of everything you want to know smushed into a digital magazine. See exclusive and uncensored content of Julia Rose and other up and coming instagram models, find out about the birds and the bees, up and coming masterminds, latest sports stories, and what the actual f*ck is going on in the world all in one place.  (And yes there will be boobs…plenty of boobs)

So here’s the letter Rose got from MLB, telling her she was banned -Crossingboard

Posted in Entertainment, News, Sports and tagged boxing, jake paul, loagan paul, mike tyson
← South Legend and Atlanta Rapper, T.I., tells fans that ‘Nobody f*cking with him’ when it comes to rapping, mentions Jay Z, Nas , and more….Domestic Violence allegations and rumors of a break up are denied by Pardi- Megan Thee Stallion’s boyfriend. →