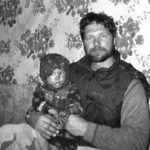 Trump presented the award to Chapman’s family Wednesday. Chapman was the first airman to receive the award since the Vietnam War, officials said. The sergeant was a native of Windsor Locks, Conn., and the father of two young girls.

Trump said at the ceremony that Chapman, from an early age — his life was about: “to protect those in need.” The president said it began early when he protected a kid being bullied in kindergarten, setting the path of his life.

Trump said Chapman volunteered for Afghanistan after 9/11, telling his superior, “‘I need to go.’”-FOX

U.S. Air Force Tech Sgt. John Chapman exposed himself to enemy fire, giving his life for his team in Afghanistan in 2002. Today his sacrifice will be recognized with the Medal of Honor. We'll be sharing the live stream today at 3:30pm. pic.twitter.com/nRdIvENBF7

Sergeant John A. Chapman was awarded the Medal of Honor posthumously for extraordinary heroism on March 4, 2002, on Takur Ghar mountain in Afghanistan. His heroic actions, at the cost of his life, are credited with saving the lives of his teammates. pic.twitter.com/QK2Gj4PiCd

Air Force Tech. Sgt. John A. Chapman, who was killed in an infamous battle with al-Qaida militants in the early months of the war in Afghanistan, will be posthumously awarded the Medal of Honor today.https://t.co/oCrCztSl3o

.@POTUS on Medal of Honor recipient Sgt. John Chapman: "In his final act of supreme courage, John gave his life for his fellow warriors." https://t.co/bRg66rdX1F pic.twitter.com/iankXgw2II

Chapman will be just the 19th airman to be awarded the Medal of Honor since the creation of the Air Force in 1947, and the first airman to receive the award for actions occurring since the Vietnam War. pic.twitter.com/NjssJkX5ah

In the final two hours of his life, Air Force Tech. Sgt. John A. Chapman saved the lives of an entire special operations teams.

Today, he becomes the first airman to receive the Medal of Honor since the Vietnam War https://t.co/saZO8SeZpy pic.twitter.com/mn8gIQNR59

With today's Medal of Honor ceremony for TSGT John Chapman, I want to acknowledge the great reporting of @SeanDNaylor who has been on the story of Takur Ghar from the beginning: https://t.co/Cy0Pf8fjxG & https://t.co/V2lhoerXt5

Pres. Trump awards a posthumous Congressional Medal of Honor to the family of Air Force Technical Sergeant John Chapman for his heroic actions during a 2002 mountainside battle in Afghanistan. https://t.co/jAPoSYQPJm pic.twitter.com/kHht85BjmT

WATCH: John Chapman will be posthumously awarded the Medal of Honor this afternoon.

Take a few moments to learn about @USAirForce TSgt John Chapman’s selfless heroism, earning him the Congressional #MedalOfHonor. As @POTUS Trump described, “in his final act of supreme courage, John gave his life for his fellow warriors.” https://t.co/Vjg0i0aaIb

Amid a White House reeling from Tuesday’s bombshell courtroom dramas of Paul Manafort and Michael Cohen, President Donald Trump turned his attention to his role as commander in chief Wednesday afternoon, presenting the Medal of Honor to Tech. Sgt. John Chapman.

Chapman, a member of the US Air Force, received the Medal of Honor posthumously for “extraordinary heroism” in March 2002 during the Battle of Takur Ghar in Afghanistan, per the Air Force official website.
Trump called Chapman a “great warrior” as he told attendees about the airman’s efforts in the battle.
After his aircraft came under enemy fire, a teammate was ejected and the helicopter crash-landed, Chapman and his team members returned to Takur Ghar mountain to rescue their teammate.
At 10,000 feet, Chapman “charged into the enemy fire through harrowing conditions, seized an enemy bunker and killed its enemy occupants. He then moved from cover to engage a machine gun firing on his team from a second bunker. While engaging in this position, he was severely wounded by enemy gunfire. Despite severe wounds, he continued to fight relentlessly, sustaining a violent engagement with multiple enemy personnel before paying the ultimate sacrifice,” according to a statement from the White House.
“As John fired on the second bunker he was shot and fell to the ground and lost consciousness,” Trump said, noting that once Chapman regained consciousness, he continued to fight.”He really fought. Good genes, you have good genes,” he said as Chapman’s family looked on.
The President continued, “In his final act of supreme courage, John gave his life for his fellow warriors.”-CNN
Posted in News
← Mollie Tibbetts murder suspect identified#Jeff Sessions →