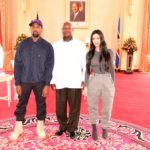 Kanye West and Kim Kardashian West are visiting Uganda and met with President Yoweri Museveni, presenting him with a signed white pair of Yeezys. The couple also handed out free shoes to school kids. Museveni is accused of multiple human rights abuses during his 32-year rule.-Twitter

I welcome American entertainment stars Kanye West and @KimKardashian to Uganda. I held fruitful discussions with the duo on how to promote Uganda's tourism and the arts. I thank Kanye for the gift of white sneakers. Enjoy your time in Uganda. It is the true Pearl of Africa. pic.twitter.com/BO0iD0sFCP

Here's a video of Kanye giving a pair of Yeezys to the president of Uganda pic.twitter.com/sSTjWSq1TS

Today it was a pleasure to meet and interact with American superstars (and great friends of Uganda) Kanye West and @KimKardashian. pic.twitter.com/4ANMBMH6NP

It doesn’t appear that the President of Uganda is Keeping Up with the Kardashians.

During Kim Kardashian West’s trip to Uganda with husband Kanye West and 5-year-old daughter North, the couple met with President Yoweri K Museveni on Monday, when he inquired about the reality star’s profession — and seemingly revealed that he wasn’t aware of her long-running reality TV series.

“They met with the President of Uganda and the president asked Kim why she had to leave early, she replied that she had to go back to work,” a source tells PEOPLE.

“The president then asked what was her job and Kim, very politely, said that she had a TV show with sisters and family and they were all waiting for her return,” the source adds about KUWTK.-People.com

Kanye West giving out pairs of Yeezy Boost 350 V2 to orphans in children's homes in Uganda. He's visiting charities and donating clothes, shoes and money to them in Uganda. pic.twitter.com/HNPuoEtHac

Uganda the pearl of Africa Kenye west and Kim ,in Musulita children's village giving out some gifts to the school children pic.twitter.com/67IQ3QisIU

Kim and Kanye snapped with giving those kids in Uganda free yeezys!!! They lookin fresher than ever

Hopefully Kim & Kanye are in Uganda advocating for its LGBTQ citizens who face a government that has one of the worst records on LGBT rights & safety anywhere in the WORLD, giving President Museveni a pair of shoes, while he advocates for gay men to be burned in public. pic.twitter.com/IgellgUjPW

Kanye West is in Uganda, where he has reportedly constructed a pop-up studio to work on his next album, "Yandhi" https://t.co/NjJOZv4Px2