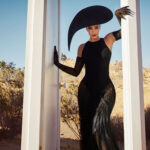 You can’t put a label on Kim Kardashian. Since stepping into the spotlight with her game-changing reality series Keeping Up With the Kardashians in 2007, Kardashian has become a television fixture, shapewear entrepreneur, social media innovator, criminal justice activist, law student, designer muse, and mother. Set to share yet another side of herself when she unveils, The Kardashians, her Hulu documentary series on April 14th, the star intends to give her audience a cinema verite look at fashion, fame, and family. -Vogue

Despite more than a decade of media omnipresence, Kardashian feels she’s only started to find her footing. “I used to be so affected by so many things,” she shared on stage this morning during Vogue’s Forces of Fashion conference, presented by Stuart Weitzman. “[I remember] the whole experience of being pregnant in the spotlight, how nasty people were to me in the press for gaining weight while pregnant, [but] you get to a place where you realize it doesn’t matter. It took me until recently to reach that point, but you do figure it out. [Eventually] you get to this place where you don’t care, even though there are all these messages about you. It can be hard to take the high road and avoid correcting the narrative.” -Vogue

At 41, Kardashian has achieved a sense of inner calm. Newfound confidence in her style, business acumen, and the projects she takes on have informed the star’s current choices, and when it comes to big decisions, she goes with her gut and only accepts input from her inner circle. Case in point: that now-iconic veiled Balenciaga look she wore to the 2021 Met Gala? It wouldn’t have happened without a long chat with the brand’s creative director, Demna. “When he told me about the idea, I could tell he was trying to ease me into it,” she shared with Vogue.com’s editor Chioma Nnadi. “At first, I didn’t get it. I can’t go to the Met and cover my face; what is my glam team going to do? But I trust Demna 100 percent. You have to have that trust so that even when you’re taking a big risk, you know it’ll be worth it.” -Vogue

Though she’s moved from having PRs deny her requests for samples to having iconic designers create custom looks just for her, Kardashian doesn’t take her fashion ascendancy for granted. “It’s just so cool to see a fashion legend at work,” she says of her collaboration with the late Manfried Theirry Mugler. “You think you know everything, but you learn so much just by looking at their [work], seeing what inspires them, and how their houses operate.”  -Vogue

Now starring in campaigns for the world’s biggest luxury brands and running her shapewear range SKIMS—which received a $3.2 billion evaluation in January—Kardashian is generally considered one of the most influential people in entertainment. Still, she’s still waiting to impress her harshest critic. “North is very opinionated when it comes to what I’m wearing,” she says. “She’ll always complain when I’m wearing too much black. I showed up at her school on Valentine’s Day wearing head-to-toe pink, and she got so excited she ran over and hugged me. [Of course] she opened my coat, saw the black lining, and says ‘Mom, you’re still wearing black.’” -Vogue

Posted in Entertainment, Fashion, News
← Meet 5 Billionaires You May not Know AboutConor McGregor Arrested in Ireland for Dangerous Driving →