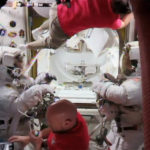 Once outside the International Space Station, commander Drew Feustel struggled to remove a protective cover in order to disconnect an old cable and hook up a new one for the new cameras. He used a small crowbar and noted if “I had more hands” the job would be easier.

His spacewalking partner, Ricky Arnold, floated over to help. Between the two of them, the astronauts managed to complete the initial cable work.

Watch the spacewalk live on NASA Television and the agency’s website.

Arnold, embarking on his fifth spacewalk, is extravehicular crew member 1 (EV1). His spacesuit has red stripes, and views from a camera on Arnold’s helmet are designated with the number 17.

Feustel is designated extravehicular crew member 2 (EV2) for this spacewalk, the ninth of his career. Feustel’s spacesuit has no stripes, and views from his helmet camera are labeled with the number 18.-Nasa

LIVE NOW: Watch as @Astro_Feustel & @Astro_Ricky prepare to venture into the vacuum of space for today’s #spacewalk https://t.co/XLxDPBXHMj

NASA astronauts Ricky Arnold and Drew Feustel are set to go on their third spacewalk together this year on Thursday at the International Space Station. #AskNASA https://t.co/aJXDHU474n pic.twitter.com/bLQf4wHD8L

Astronauts Ricky Arnold and Drew Feustel switched their spacesuits to battery power at 8:06am ET, signifying the official start of today’s planned 6.5-hour spacewalk outside the station. https://t.co/Qv2wMa1D1C pic.twitter.com/6DuUjDqe2k

Spacewalkers @Astro_Ricky and @Astro_Feustel are placed in the crew lock now and are waiting for depressurization and the start of their spacewalk at around 8am ET. #AskNASA https://t.co/yuOTrZ4Jut pic.twitter.com/BMDpmogSB7

You might hear the @NASA_Astronauts be asked to perform a glove & HAP check during today's #spacewalk. The HAP is a small pad in the back of the crew’s helmet that would collect water in case it entered. It stands for:
H = Helmet
A = Absorbency
P = Padhttps://t.co/QSQ2ceQRzY pic.twitter.com/loU4K9hnDQ

“Sometimes on a spacewalk, you just have to take a moment to enjoy the beauty of our planet Earth.”

Tomorrow will be the 1st time the Expedition 56 Patch goes outside for a #spacewalk! An especially significant event for me since my son designed the patch. pic.twitter.com/vVFkT47W8K

The Expedition 56 crew huddled together today finalizing preparations for Thursday’s spacewalk and managed to squeeze in some science today. #AskNASA https://t.co/QAZjT85CWw pic.twitter.com/Mjntjf0B3H