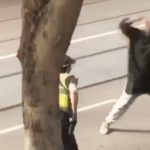 A man who set a car on fire and stabbed three people – one fatally – in the Australian city of Melbourne has died in hospital after being shot by police.

Authorities now say they are treating the attack as a terror-related.

The attacker, 31, was shot after confronting officers on a busy city street, authorities said. He was taken into custody in a critical condition.

The two survivors are in the hospital, neither are in a serious condition. The suspect has not been named.

Police said they were “not looking for anyone further at this early stage”. -BBC 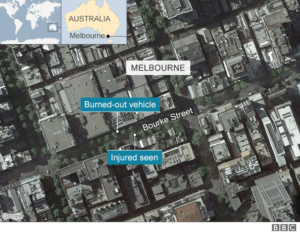 Terrorist attack in #Bourke Street #Melbourne, #Australia
– 3 people were stabbed
– 1 person has been confirmed dead
– The accused is in a critical condition pic.twitter.com/a6s4f6MQcs

THREE STABBED, ONE DEAD AFTER HORROR IN MELBOURNE: What you need to know https://t.co/QShnqahUxn pic.twitter.com/tRkUa9Z2MV

This video is not taken by me, but being circulated among various @WhatsApp groups. pic.twitter.com/NCDTjdYWtN

Man who carried out Melbourne attack dies in hospital after being shot by police, incident now being treated as terror-relatedhttps://t.co/iUGutlKxo4 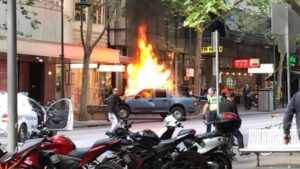 A body is seen under a white sheet following a stabbing attack in Melbourne's central business district.
"A man was arrested at the scene and has been taken to hospital under police guard in a critical condition," police say pic.twitter.com/uZPZS8OHUW 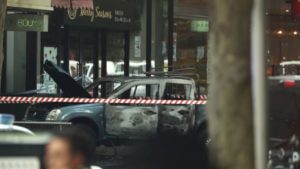 When they say “Knife-wielding maniac” do they mean muslim migrant? https://t.co/z4w1RfPANJ

Australian police have shot a knife-wielding man who is believed to have stabbed three people in Melbourne's city-center, killing one of them: https://t.co/AiO9nQJ2cT pic.twitter.com/S1N8Phcbyi

Whoever says the Melbourne terrorist was mentally ill will receive a block from me.

Here's what we know about #BourkeSt so far:
• A knife-wielding man has been shot by @VictoriaPolice after 3 people stabbed
• One stabbing victim is dead, 2 are in hospital
• Video shows a car on fire
• A bomb response unit is making the scene safe https://t.co/AeULPaLKoS pic.twitter.com/1FJEaLaeuB

1 killed, 2 injured as a knife-wielding man went on a rampage in a busy street in central #Melbourne. It is reported that the man burned a car before starting the attack

While police faced off with a knife-wielding man in Bourke St, Melbourne, one heroic eyewitness grabbed a trolley and ran to help.@newscomauHQ #auspolhttps://t.co/LmfLTA0xkQ

What we know so far about the Bourke Street attack in Melbourne, Australia https://t.co/9mSouVnPTK pic.twitter.com/hP4iMR30R3

Thank you to the @VictoriaPolice officers who responded so bravely, and the every day Victorians who came to the aid of complete strangers. Please continue to avoid the area. Anyone with information should attend Melbourne West Police Station to make a statement.

She was reported missing at 5.10pm on Wed, Nov 7 and was sighted near McDonald’s in the High St at around 5pm yesterday

Melbourne Attack – Police: Three pedestrians stabbed – one has died. One man in custody. Police are not looking for other suspects #Melbourne @10NewsFirstMelb pic.twitter.com/8gy4XbyP8k

.@MatthewGuyMP on the Bourke Street incident: I’ll never accept that violent extremism should be a way of life for a big city like Melbourne. All the resources of our state should be directed towards keeping Victorians safe.

That short video of the Melbourne terror attack has been scraped and going crazy on British far right Facebook pages. pic.twitter.com/PfV8PVA3U5