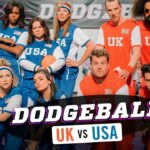 On The Late Late Show with James Corden, the English entertainer begins a bit that seems like it’ll be another Carpool Karaoke segment with Michelle Obama. But then the pair begin to argue over America vs. The UK. Who has better music? Who is better at sports? Specifically, which nation is better at dodgeball? So naturally, they in their celebrity friends to settle that question with a no-holds bars showdown: Team US versus Team UK, contending for dodgeball supremacy.

Team UK was made up of Corden, Harry “Sign of the Crimes” Styles, Benedict “The Claw” Cumberbatch, John “Hurt You Badly” Bradley, and Reggie “Windmill” Watts, who is an American, ringer, and traitor. -Pajiba

Thousands of academics are gathering in Vancouver for the annual Congress of the Humanities and Social Sciences from June 1-7. They will present papers on everything from child marriage in Canada to why dodgeball is problematic. In its Oh, The Humanities! series, the National Post showcases some of the most interesting research.

The games children play in schoolyards are famously horrible, if you stop and think about them.

Tag, for example, singles out one poor participant, often the slowest child, as the dehumanized “It,” who runs vainly in pursuit of the quicker ones. Capture the Flag is nakedly militaristic. British Bulldog has obvious jingoistic colonial themes. Red Ass, known in America as Butts Up, involves deliberate imposition of corporal punishment on losers.

But none rouse the passions of reform-minded educational progressives quite like dodgeball, the team sport in which players throw balls at each other, trying to hit their competitors and banish them to the sidelines of shame. -The National Post