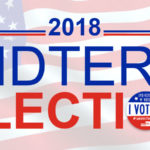 Millions of Americans will head to the voting booth (if they haven’t voted already) Tuesday to cast their ballots in the U.S. midterm elections.

And when the first polls — in Indiana and eastern Kentucky — close at 6 p.m. ET, Global News will have live midterm elections results for the House of Representatives and the U.S. Senate in a graphic above as soon as they’re announced. Reaction, links and more detailed coverage will also be available in the live blog below.

There are 435 seats in the House of Representatives (commonly referred to as Congress) up for grabs and 35 in the U.S. Senate. There are also 36 state governors being elected and legislative races in 46 states and six territories. -Global News

Even tho my cat Dj Ravioli and I woke up super exhausted today we still made it out to vote! Retweet this if you did the same! Go vote meow! #ElectionDay #IVoted pic.twitter.com/wuZTRBQgNi

#IVoted
I'm a Muslim,
& I say it is from God's wisdom that Apollo11 was landed by non-Muslims because if it was done by Muslims some people may say: (Muslims planned to do it on that day to match the numbers of the Moon in the Quran).
4more:
JustPaste .it/zy
WyoAk.SimpleSite. com pic.twitter.com/MXwtxglRuU

You voted, which one of the bankster and war profiteering puppets did you pick?#IVoted pic.twitter.com/78PqW4kuQH

Vote like your rights depend on it, because they do. #IVoted pic.twitter.com/xU8JHCqv8D

Civic duty completed!
Get out there and make this a nation that speaks with YOUR voice! #IVoted pic.twitter.com/Jj22AhkTqJ

although I didn’t get the #IVOTED sticker I have something even better to walk around with: the pride and joy of what it feels like to finally be able to VOTE AND USE MY VOICE!! GET TO IT PEOPLE!! EVERY VOTE COUNTS!! pic.twitter.com/RwHNNf8idZ

#IVoted because the patriarchy isn’t going to dismantle itself pic.twitter.com/A7e6sdurwC

Demi Lovato is back and she just casted her vote! #IVoted ?❤️ pic.twitter.com/Z0dgwYtNTj

go out, use your voice, vote. in 2016 only 13% of all eligible voters aged 18-24 voted. you have the power to impact your future.
be down to vote • @ImDownToVote #rockthevote #electionday #vote #govote #america #ivoted pic.twitter.com/qhzVJhmzgM

i like to take kiddo with me so she understands how important it is to vote #IVoted pic.twitter.com/IxWnRtimLL

drove 40 minutes to/from a friend’s house to grab my ID so i could vote. totally forgot you don’t need an ID to vote in CA. but they still let idiots like me vote! which is why it’s very important that YOU GO OUT AND ALSO VOTE thank you god bless #IVoted pic.twitter.com/kXkpdokR6r

Ever since Limbaugh dubbed me “The Forehead” I’ve been wondering how to make the best use of the ample real estate up there. I think I’ve nailed it. #IVoted pic.twitter.com/kOZrbFg5FY

Watch why these former Democrats are now voting Republican…

Grabbed my 18 yr old and went to the poll. So very proud of my son voting in his 1st election. It matters more because it means he has a say in the way he would like his Country to be. #IVoted pic.twitter.com/9uDKDnEPm4

He has a valid driver's license, so it was cool ?#IVoted pic.twitter.com/avXbIN8zNL

#IVoted Proudly voted for the first time today all blue to bring safety and peace back into are country pic.twitter.com/m49Zg01byu

I am proud to be able to exercise my right to Vote. I hope you went out and voted too. #IVoted pic.twitter.com/BjbtFK64bS

#IVoted and so did my Furby.
What’s your excuse? pic.twitter.com/fhQyCWe8Ve

Teamwork makes the dream work! I’m happy to be voting along side @BTS_twt army ?and I hope everyone finds the time to speak themselves today ? #VoiceYourself_Vote #IVoted pic.twitter.com/1BxfLI7sgk

I voted. Did you?

I want to see your 'I Voted' stickers—or if you voted by mail, tell me how that went! @ me with your photos/stories. Bonus points for Californians who use the #CaliforniaCounts hashtag. #vote #ElectionDay⁠ ⁠ #IVoted⁠ ⁠#GoVote #VoteBlue pic.twitter.com/G8YG4gBVVi

So happy that I went out to #earlyVOTE ? & I’m so proud to be apart of an HBCU that is about CHANGE! ✊? Go vote while you can so that TOGETHER we can make a DIFFERENCE ! #ivoted pic.twitter.com/rpr35DJKzW

My first graders look up to me. They asked me about my sticker today! Let’s teach them early about the importance of voting! #IVoted #proudteacher pic.twitter.com/0q1wwrmZLx

I voted… my name wasn’t on their list even though I voted earlier this year and had confirmation of being registered today… but… I voted! Rock the Vote! Do we still say that? #ivoted #electionday #govote pic.twitter.com/3yc2G2MtRQ

Voter #682. Please vote today!! And then after you vote, go perform a random act of kindness. The world would be a beautiful place if we had as many acts of kindness as we had voters today… #IVoted pic.twitter.com/cmxN5g1RFS

Retweet this to encourage your friends and fam to get out to the polls and VOTE. #IVoted #ElectionDay pic.twitter.com/TGiCZqMYpz

Listen… the weather is gross, everything is a mess… but I threw on my coat, dragged myself out of my cave and #IVoted ! ??#ElectionDay #SpeakYourselfandVote pic.twitter.com/GrrYCJhmhO

I did something important today, now what was it… #ivoted pic.twitter.com/7pPEbTJBQI

random voter from all of our social media acccounts to will win a copy of Smack Talk Showdown and other great prizes! The photo doesn’t have to be from today if you took advantage of early voting. Go out and Smack (Talk Show) Down the vote! #ivoted⁠ ⁠ #ivoted⁠ ⁠?? #vote pic.twitter.com/bOLrKkRRRR

In honor of all the women who fought for me to cast my ballot. #IVoted pic.twitter.com/bDLgBbOSAq

My cat let me borrow his hat for this #ivoted #ElectionDay selfie ?? pic.twitter.com/vYs5lwva4U

Be a voter. It’s fun, easy, and you get to elect people that aren’t nazis! #IVoted pic.twitter.com/nF7eDzO6zR

Nailed it. Today's sticker is helping to hold Bliss in place. #IVoted pic.twitter.com/cGNy6YdFHC

I voted for candidates who believe in free and fair elections.

I voted for candidates who do not use religion as an excuse for being intolerant.

I voted for candidates that believe in actual facts.

I voted for positive change. #IVoted

@SofiaCarson I voted yesterday and couldn't be more prouder to exercise my right to vote! #iVoted pic.twitter.com/Mk3xpBqT1D

#IVoted for civility, for equality, for our children, for the environment, fir science, and for hope. I choose to believe we can work to fix this mess. pic.twitter.com/SqzmHYrRm5

Get out and vote! Keep America safe. Keep our economy safe. Your vote and voice matters. #IVoted pic.twitter.com/kb5mPGWOp0

? Vote like your daughter’s future depends on it. #IVoted pic.twitter.com/JgypmokGzH

It's late in Uganda but I am going to sleep wearing my lucky shirt. I hope I wake up to good news. #IVOTED #BETO #TX #NY #USA pic.twitter.com/9p2AasHLL9

I have no clever caption. I just wanted to take this photo. #IVoted pic.twitter.com/FHIgw9tET7

I voted!! It’s so easy even Baby could do it, please vote! #IVoted #GetUpAndVOTE pic.twitter.com/vywKOAtfjP

On my way to my post-op surgeon appointment I stopped off to vote for candidates that will protect my access to healthcare. Without which I may have died 2 weeks ago, or bankrupted my family with my 6 day hospital stay. #ElectionDay #IVoted pic.twitter.com/U5Cn8UmU1l

It’s definitely not going to magically fix the mess that is this nation, but it’s a start #ivoted pic.twitter.com/r7dGIOPMhi