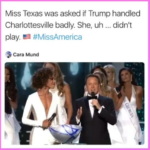 Miss Texas” Margana Wood was asked a question about President’s Trump’s response to the white supremacist march in Charlottesville during Miss America Pageant on Sunday night. Let’s just say in 20 seconds she shut it down.

I think that the white supremacist issue, it was very obvious that it was a terrorist attack. And I think that President Donald Trump should’ve made a statement earlier addressing the fact, and in making sure all Americans feel safe in this country. That is the number one issue right now. 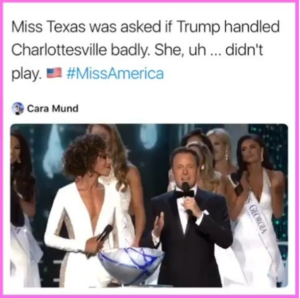 Shout out to #MissTexas on taking @Potus to school on #Charlottesville

#MissTEXAS speaking up on white supremacy & how Trump didn’t speak up on it fast enough ??

What do you think?
Do you think Miss Texas response was fire or not so hot? Comment below.