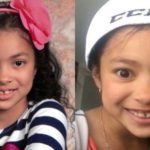 The mother of a seven-year-old girl who died at her home in Langley, B.C., almost a month ago has been charged with second-degree murder.

The Lower Mainland’s Integrated Homicide Investigation Team (IHIT) said Kerryann Lewis, 36, was charged on Aug. 17 in the death of her daughter, Aaliyah Rosa. The cause of the girl’s death has not been released.-CBC

A Langley woman has been charged with second-degree murder in the death of her seven-year-old daughter. https://t.co/eLvxO6hJdj

Family member of Aaliyah Rosa, 7YO killed last month, says they are ''relieved charges have finally been laid'

The young girl's mother, 36YO Kerryann Lewis has been charged with 2nd degree murder and is set to make her first court appearance later this afternoon. pic.twitter.com/mYEZMad9Ng

.@HomicideTeam Cpl Frank Jang says they hope that the second degree murder charge in Aaliyah Rosa’s death has brought a bit of closure to “this deeply tragic death.” Kerryann Lewis is expected to make her first court appearance this afternoon. @BlackPressMedia pic.twitter.com/hQICeLWcLE

Friends and family of 7 y/o Aaliyah Rosa are gathering for her memorial service. Everyone wearing pink and purple – her favourite colours and others wearing blue because she was in girl guides. Homicide investigators have not released many details on her death. #Langley pic.twitter.com/VTudXAA2IY

On July 22, 2018 at about 9:30 p.m., emergency services were called to an apartment building near 200th Street and 68th Avenue in Langley, B.C. where they found seven-year-old Aaliyah Rosa deceased. Aaliyah’s death was deemed a homicide and the Integrated Homicide Investigation Team (IHIT) took conduct of the case.-Langley advanced