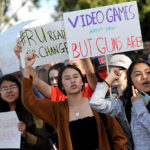 The walkout today was not about gun control for me, it was a chance for me to gather with a few of my close friends & pray for the victims & their friends & family & spread positivity. Although I’m not for gun control I am for prayer for the families who lost their children.

My students spent the aftermath of the walkout in lock down as a guy with a pair of guns showed up to protest the protest.

Just found out my daughter’s elementary school had the older students walk out today and the movement was fully supported by the administrators. So thankful and proud!

The teachers at my school wanted to walk out with us. The school threatened them so they didn’t

Today students from across the country participated in National School Walkout Day against gun violence—but here's a movement that's not being covered by the mainstream media: #WalkUpNotOut. pic.twitter.com/hAUEaHp5Vy

My daughter did the walk out at Mid City.

Columbus City Schools participate in 'Safer Together Day' as part of National Walk Out Dayhttps://t.co/oMlGrbDa8x pic.twitter.com/5yvxPXDqx0

Disappointed in the fact that a 17minute silence was turned into a 19minute gun control speech. As i was writing this i was told the walk out would be to remember the victims and have a moment of silence @brooke_ww this is hypocrisy at its finest. The victims would not be proud. pic.twitter.com/B4A6SzGBZ8

Sorry to those who were offended by the materials some students decided to distribute at the walkout. That was not part of the walkout’s message and we did not sponsor or approve it pic.twitter.com/ShGn9phQfP

We are tired of sitting in the closet praying for our lives… for all of the lives lost in school shootings and mass shootings, we walk out and fight for you #neveragain #wecallbs #bspawalkout @Sarahchadwickk @Emma4Change pic.twitter.com/3VhZEAQcr5

for those of you who would like to read the walkout statement written by @emphelpss and myself: pic.twitter.com/jIMKqOUvU5

Elementary school walkout in Alexandria, Virginia. More than 65 kids, and they are totally silent. Look at those faces. pic.twitter.com/ThyzDtyGo5

Students to walk out of classrooms for 17 minutes in memory of Marjory Stoneman Douglas High School shooting victims and to protest gun legislation. https://t.co/YQv4VBdv0X

The media will only show students in favor of gun control during today's walkout. I've received dozens of emails from high school students with another story to tell, and who feel bullied into acting as props for an agenda they oppose. https://t.co/xPR6QWJM0i

Crazy ol’ #BernieSanders is a hypocrite. He literally had an armed police detail following him at the student walkout today. If you are protesting guns, you forfeit protection by them. Next time carry rocks to protect yourself,” tweeted Students For Trump founder Ryan Fournier. pic.twitter.com/ejEGlch0kI

Students around the world walkout of classes in solidarity with U.S. students https://t.co/oo7nLDIODP pic.twitter.com/QxoM8YcNrH

When my 13 yr old got a text about the walkout she said and I quote “that’s stupid to walk out of school for this! Criminals don’t care what law you make on gun control. Bad people will still do bad things they don’t care about the law #smartkid #NationalStudentWalkout