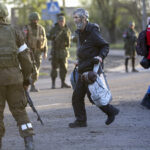 The 11-day manhunt for former Alabama corrections official Vicky White and the prisoner she helped escape ended in Indiana on Monday with her dead from a gunshot wound and him in handcuffs, authorities said.Yet the end of the saga leaves a number of questions still unanswered, none more so than the obvious: Why?Why did Vicky White, a 56-year-old corrections official about to retire, decide to sell her house, stockpile cash and flee with a prisoner nearly two decades her younger who was in the early part of a 75-year prison sentence?

Some answers may be provided by Casey White, the 38-year-old prisoner, who spoke freely with investigators after his capture, Vanderburgh County, Indiana, Sheriff Dave Wedding told CNN.

“He was pretty candid with investigators last night. They had a fairly lengthy interview,” Wedding said Tuesday.

Here’s a look at a number of open questions concerning the search. -CNN

Barrymore suggested that the couple get married wherever seemed right, noting that whoever showed up would be the people who were meant to be there. Says Mathews, “It was great advice.” -People

The Kardashian family attorney has responded to Chyna’s claims, and didn’t hold anything back, saying Chyna’s latest filing is a, “baseless effort to save face after losing at trial.”

They continue, saying while Chyna and her attorney may be upset they lost at trial, “their effort to make a scapegoat of Judge Alarcon is frivolous, dishonest, and deserving of sanctions.” They also point out the fact Chyna’s attorney didn’t have an issue like this with the judge until “after the jury found against her client.”

Blac Chyna thinks the deck was stacked against her in her fierce legal battle with the Kardashians … she accuses the judge of harboring an extreme bias.

According to new legal docs, obtained by TMZ, Chyna is accusing Judge Gregory W. Alarcon of showing an “undeniably hostile and extremely biased” attitude against her and her attorney.

Chyna claims the judge’s alleged bias worked against her … specifically in regards to the judge’s jury instructions Chyna thinks led to the eventual verdict, which went in the Kardashian’s favor. -TMZ

Tech billionaire Elon Musk said Tuesday that he would allow former President Donald Trump back on Twitter after Musk completes his plan to buy the company, giving the most concrete example yet of how his vision of social media would play out in reality.

Musk said at an event sponsored by the Financial Times that it was “morally bad” and “foolish in the extreme” for Twitter to permanently suspend Trump in January 2021 after Trump’s supporters violently stormed the U.S. Capitol, according to a video of the event posted online.

“I do think that it was not correct to ban Donald Trump,” Musk, the CEO of Tesla, told the newspaper’s Future of the Car event via remote video.

“I think that was a mistake because it alienated a large part of the country and did not ultimately result in Donald Trump not having a voice,” he said, citing Trump’s newly launched tech platform, Truth Social.

“I would reverse the permanent ban,” Musk said. -NBC News

Overall approval for the Biden Administration’s handling of the war in Ukraine has been fairly stable, at47% in March and 45% in May, while disapproval fell from 39% to 34%, reflecting a greater proportion of respondents who did not provide an answer on the topic.

On Monday night, as we were busy indulging in the sparkly dispatches from the first Monday in May (aka the 2022 Met Gala), a draft opinion of a Supreme Court ruling written by Justice Samuel A. Alito Jr. was leaked and published by Politico. In the draft, the majority of the Court (five of the nine justices) argues to overturn Roe v. Wade and Planned Parenthood v. Casey, two landmark cases that ensured safe and legal abortion access throughout all 50 states. And although the opinion is just a draft for now, if passed (reportedly later this summer), it would end federal protections for abortion rights and reproductive justice, effectively leaving the issue up to each individual state. Thirteen states have already passed “trigger laws” that would immediately outlaw abortion if Roe is overturned. -Cosmopolitan