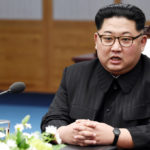 A letter from the President to Chairman Kim Jong Un: "It is inappropriate, at this time, to have this long-planned meeting." pic.twitter.com/3dDIp55xu1

Here is The scorecard on The Nobel Prize

Donald Trump has cancelled his summit with Kim Jong Un. Not exactly a shocker. While right-wing America foolishly demanded that the President win the Nobel Peace Prize, the rest of us knew Trump was getting played.

#Trump cancels his meeting in #Singapore, releases a letter to #KimJongUn as though this was just a garden tea party and #Trump has nothing to wear. Like it had nothing to do with nuclear saber rattling by #NorthKorea. #TrumpFail #45LiarInChief #Pence pic.twitter.com/qmcUKwnjcB

With all due respect, I don’t know how Trump got played by Kim Jong Un. Trump got 3 hostages out of North Korea and got them to dismantle parts of their nuclear weapons program, including destroying one of their testing sites. And he gave them what exactly? https://t.co/HUbTsKCzPN

A few weeks ago Rudy Giuliani claimed Trump was too busy preparing for his meeting with Kim Jong Un to meet with Mueller. Well it now looks like Trump has all the time in the world to go perjure himself. Let’s get this show on the road and this criminal out of the Oval Office.

Perhaps one reason for the #Singapore summit cancellation is that Kim Jong Un had a very well-developed game plan for the meeting, and a clear understanding of the issues, background and history involved. Regrettably, his US counterpart did not. https://t.co/2C8iAFfzjK

"Being inside this country just hours after they blew up their nuclear site… it was a very awkward and uncomfortable moment": CNN’s Will Ripley was in a room with North Korean officials when news came that Pres. Trump canceled a meeting with Kim Jong Un https://t.co/si9DqEIse1 pic.twitter.com/SDJQ1hnRN0

Trump will never win a Nobel Peace Prize but he will always have this coin to commemorate both his shattered dreams measuring up to Obama and his being played by Kim Jong Un. The flags of both countries are even broken apart in the coin like the men who destroyed them. pic.twitter.com/9ycYDZRxud

Thoughts about The Letter:
1) Since when did anyone ever call Kim Jong Un "His Excellency"?
2) totally / tremendous / massive /powerful = Trump dictated this
3) "wonderful dialogue was building" = maybe these two actually spoke on the phone?
4) call me, maybe?

Ambassador Wendy Sherman on why the "13-year-old stream of consciousness break-up letter" sent by Trump to Kim Jong Un takes us right back to the "my button is bigger than your button" kind of diplomacy that freaks out the whole world. #25thAmendmentNow pic.twitter.com/G8BFCii40O

From Trump’s letter to Kim…

“You talk about your nuclear capabilities, but ours are so massive, I pray to god I don’t have to use them”

In a letter to Kim Jong Un, President @realDonaldTrump canceled the highly anticipated summit with North Korea that was set for next month. https://t.co/UlzBnkOdzs pic.twitter.com/egEZfCUxqj

This is Trump this morning acting like “there’s a good chance” his meeting with Kim Jong Un will happen.