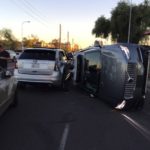 A woman was killed after being hit by a self-driving Uber car in Tempe, Arizona while crossing the street. It’s the first confirmed pedestrian death from a self-driving vehicle.

Uber says it's suspended testing of self-driving cars in cities across the U.S. pic.twitter.com/a3jvvIZwo7

Why on earth do we need more regulation in our lives? Self-driving cars are simply another way government can track our lives. We need self-driving cars so that, what, we can have more time to text behind the wheel? I hope this family sues those negligent. https://t.co/Uwlw4cSVod

JUST IN: Police: Female pedestrian has died after being hit by an Uber self-driving vehicle, which was rolling in autonomous mode with a driver behind the wheel, while she was walking outside of crosswalk while crossing road in Tempe, Arizona. https://t.co/wcRZMFfsnZ

A self-driving #Uber car hit and killed a woman. Cops say the car was going down the street, when it hit a 49 yr old woman. She was crossing the road, & was not in a crosswalk. Police say an operator was behind the wheel, but the car was in autonomous mode. #Fox35

Artificial intelligence will never duplicate human judgment. And it has no conscience. It’s not ready yet. “Self-driving Uber car kills Arizona pedestrian, police say” via the @FoxNews App; https://t.co/0UNPKbdf20

Is it time to put the brakes on self-driving cars? Many questions today after a tragedy in Arizona – when a self-driving Uber hit and killed a pedestrian. https://t.co/omjNkkbw8v

A self-driving Uber car has hit and killed a woman in the first known autonomous vehicle death https://t.co/wM7jNXVdPC

This is just an innately bad business decision because even if you were to have a near perfect self-driving Uber, the moment an accident happened (and one would), there's always going to be backlash that wouldn't exist otherwise. https://t.co/JhtVbptwLF

Alternative headline: Russian hackers hacked pedestrian causing the pedestrian to throw himself in front of a peaceful self-driving Uber, damaging the reputation of our Silicon Valley Overlords.

"A self-driving Uber SUV struck and killed 49-year-old Elaine Herzberg as she walked her bicycle across a street in Tempe, Arizona, Sunday night, according to the Tempe police. The department is investigating the crash."
Who will be held accountable?