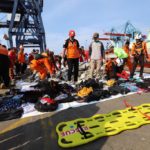 An Indonesian airliner has crashed into the sea with 189 people on board.

The Boeing 737, owned by the low-cost airline Lion Air, went down after taking off from the capital Jakarta.

Flight JT 610 was headed for the western city of Pangkal Pinang. Rescuers have recovered some bodies and personal items, including baby shoes.

There is no sign of survivors. The cause of the crash, which involved a plane that had been in operation since August, remains unclear.

The incident is reported to be the first major accident involving a Boeing 737 Max – an updated version of the 737.

“We need to find the main wreckage,” said Bambang Suryo, operational director of the search and rescue agency. “I predict there are no survivors, based on body parts found so far.” -BBC

A Lion Air flight carrying 189 people crashed into the sea minutes after taking off from Indonesia's capital city of Jakarta.

Officials say it is unlikely that anybody survived. pic.twitter.com/VyXkbJ1KMX

Breaking News: All 189 people on Lion Air Flight 610 are feared dead after it crashed in Indonesia. The country has long struggled with air safety problems. https://t.co/lLqLCl7Upf

BREAKING: Indonesia's Lion Air says it has lost contact with a passenger airplane flying from Jakarta to domestic destination

IN PICTURES: Debris and personal belongings of those on board #LionAir flight #JT610, which crashed on Monday morning after taking off from Jakarta (?: BNPB Indonesia) https://t.co/4jVWZli7ag pic.twitter.com/uBVmVIP0wB

A plane carrying 189 people crash in Indonesia. Here's what we know so far https://t.co/QaNEa8Njh9

this video was before plane crush at indonesia pic.twitter.com/ViS9SOr2Xk

We are from SoundCity sent Deepest Condolence to Indonesia Plane Crash #JT610 ?? pic.twitter.com/fy1w3fHeug

The crash of Lion Air Flight #JT610 has prompted a desperate search for survivors and questions about why the aircraft went down despite clear skies https://t.co/LywgzKsi9R

Our thoughts and prayers to the families and victims of Lion Air JT610 that crashed this morning. May everyone find strength, our deepest condolence ?

Posted in News
← Suspect found in Bomb Threat to the Obama’s, the Clinton’s and CNN among others.#QuackClinic →