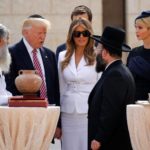 Melania and I send our warmest greetings to all Jewish people on Yom Kippur, the holiest day of the Jewish faith.

Yom Kippur is a day of atonement, prayer, and fasting, and is the last day of the Ten Days of Repentance.  Yom Kippur provides an opportunity to draw nearer to God through the practice of teshuva in accordance with the words of Leviticus: “For on this day shall atonement be made for you, to cleanse you; from all your sins shall ye be clean before the Lord.”

Melania and I pray that you are all inscribed in the Book of Life and hope this period of reflection and repentance leads to a deeper relationship with God.  We send our best wishes for a meaningful Yom Kippur and a Gmar Chatima Tova.-The White House Press

Ahead of Yom Kippur, ultra-Orthodox Jews cast out sins with chickens and water https://t.co/m5SkEdePCh pic.twitter.com/6Irjs9NBI3

Yom Kippur, the Day of Atonement, is perhaps the most important holiday in the Jewish calendar. It marks the end of a period of introspection and repentance. A 25-hour fast begins at sunset on September 18 ending sundown on September 19. pic.twitter.com/35eGJYDyXF

As the Jewish community prepares for the sacred day of Yom Kippur, we wish them a meaningful fast and best wishes for health and happiness for the year ahead.
גמר חתימה טובה pic.twitter.com/nORxbCRHhn

Everything you need to know about Yom Kippur https://t.co/vzyi6ZuVyY

Some people throw parties, others go out to nice dinners with family and friends… I’ll be celebrating my birthday by leading Kol Nidrei. ¯_(ツ)_/¯

Thank you all for your lovely wishes. G’mar hatima tova and a meaningful Yom Kippur to all from Jerusalem! גמר חתימה טובה! ? pic.twitter.com/NizUI4okkz

We just got sent this at the Office – an updated “Al Cheit” prayer for Yom Kippur, including among the many sins – “internet”, “iPhone”, “Twitter”, “YouTube”, “Galaxy”, “WhatsApp” and many more ???

Hard to tell if it’s a joke or someone means it seriously, tbh. pic.twitter.com/Uucl3ULuQM

Tonight, we mark our holiest holiday, #YomKippur. It is the day of atonement, where we reflect on the past year and look forward to building a better year ahead. I wish all of those observing an easy and meaningful fast! May this year bring peace, prosperity and strength to all.

Yom Kippur, considered the holiest day of the year in Judaism, begins this evening. We wish a meaningful and easy fast to all those observing. pic.twitter.com/8LdixuTuc5

Any moment, Israeli forces might show up and destroy the community of Khan al-Ahmar to make room for settlement expansion. Speak out to safeguard Israel’s future justice this Yom Kippur and take action to stop this demolition. https://t.co/Lp6y2036Fv#KhanAlAhmar pic.twitter.com/ene6yaQ2Tf

I can tell most of you haven't been repenting properly for Yom Kippur by how few of you have apologized for commenting without reading the article.

According to Jewish tradition, on #YomKippur (beginning at sunset 18.9, concluding at nightfall 19.9), God inscribes each person's fate for the coming year.

We wish Jews in Israel & around the world "Chatima Tova" & a meaningful holiday. pic.twitter.com/AEtEUzQVd7

Wishing all the Jewish people Gmar Chatima Tova this #YomKippur.

If I offended you on Twitter, you’re probably an Antisemite. ?

May you have a meaningful and peaceful fast, and be inscribed in the Book of Life!

A public service announcement from my mother, for all those observing #YomKippur which starts tonight, make sure you drink plenty of water. I'm 34…I still get messages telling me I haven't drunk enough. You don't want her texting you too….

As Jews in America and around the world come together in synagogue for the holiest day of the Jewish year, Yom Kippur, the Day of Atonement, Heidi and I wish all those in observance a meaningful and easy fast. May you be sealed in the Book of Life. pic.twitter.com/pLL8NjwT0i

Yom Kippur is a day of soul searching. A day for loving. A day of forgiveness and contemplation.
May we learn to love more, forgive more and embrace one another with kindness and respect.#YomKippur pic.twitter.com/LJTI7p16AT

I had never thought of #YomKippur as a "dress rehearsal" for my own death, but this is a profound and painful reflection by @bariweiss. "The day asks us to sustain the stare." Fast well, fellow sinners. https://t.co/2iKqFCTGqH

Wishing all who mark Yom Kippur a deeply meaningful day of reflection and atonement. Isaiah 58: pic.twitter.com/12LQbp4H9R

Wishing the Jewish community in London, the UK and around the world a peaceful and meaningful #YomKippur. G'mar Chatimah Tovah. pic.twitter.com/aWMNAFEeU3

Just a few days before Yom Kippur, our holiest holiday, I visited the Kotel in Jerusalem with my son.
Wishing everyone a happy, blessed and safe New Year. #ShabbatShalom! pic.twitter.com/qSuJiFZTu0

yom kippur, or as i like to call it pic.twitter.com/qXkXkXWKSt

Menachem Shimoni wrote down one of the most important #YomKippur prayers, U'Netana Tokef, by memory in 1945 while imprisoned in the Bergen-Belsen concentration camp.

#OTD The eve of #YomKippur 1941. The Jews of #Kiev were massacred in the ravine of #BabiYar. I was deeply moved, as representative of the Jewish State, Israel to recite the Kaddish in their memory. #Neveragain pic.twitter.com/LMjeVn1bLf

Tonight is the start of the most holy time of the year for Jews, #YomKippur; the Day of Atonement. Many people will fast, and head to synagogue to pray for forgiveness. It ends a week known as the High Holy Days. #9news

Wishing you and yours a meaningful Yom Kippur! The doors of prayer are wide open, make every minute count! #fasting #prayer #yomkippur pic.twitter.com/MN8u7mwTct