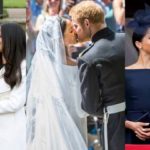 Prince Harry and Meghan Markle arrived in Sydney on Monday for a 16-day tour of Australia and the South Pacific, just hours before Kensington Palace announced that the royal couple are expecting a child in the spring.

The trip is their only international tour since the Duke and Duchess of Sussex were married in May, apart from a two-day visit to Ireland.

The palace said the couple has “appreciated all of the support they have received from people around the world since their wedding in May and are delighted to be able to share this happy news with the public.”

The baby will be seventh in line to the throne.-CBC

Of course she’s pregnant. It’s literally her job to be pregnant. If I was Megan Markle, I’d have had minimum six kids this past summer alone.

Ahhhh the old blind gossip comes through with the goods…she's certainly something, that Megan Markle. pic.twitter.com/1ogeJDjQAj

“I’m a fortune teller. Megan Markle told me to be pregnant in my dream and now she’s pregnant” @hopebinnns

Duchess Megan markle is pregnant I’m so happy for her. ?? truly a happily ever after. #royalbaby2019

This all Megan Markle been seeing since the wedding pic.twitter.com/edypHV4Ajb

The Duke & Duchess of Sussex are expecting a baby in the Spring!

Megan Markle is pregnant! The baby's due next Spring. pic.twitter.com/wgLzYqJnfB

That’s not even the entrance to Kensington Palace ? https://t.co/0Z2cB49FNk

COMPETITION — For Megan and Harry the honeymoon is over and parenthood awaits. Just ‘like’ our post if you think it will be a BOY or ‘Retweet’ for a GIRL to be entered into this weeks comp. #royalbaby #meganmarkle #princeharryandmeghan pic.twitter.com/LZ9dQAndNQ