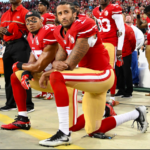 In 2016 former 49ers quarter back Colin Kaepernick’s refusal to stand for the national anthem during a pre season game sparked controversy throughout the world. Millions of people took to their social media platforms to express their views on it all. It seemed as if the country was divided. Some were completely disgusted by Kaepernick’s blatant disregard for the national anthem (the flag) and for what it stands for. On the other hand you have people that believe in Kaepernick. There for, there are many people  following his lead. The Seattle Seahawks and members of the Miami Dolphins, just to name a few, are doing what they think is right by taking a stand. I couldn’t agree more. 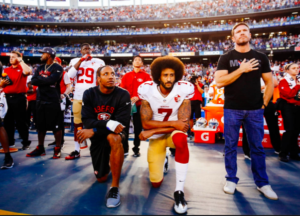 While I love my country and love being an American the inequality and injustices when it comes to minorities are obvious. How can we call ourselves true Americans if we turn a blind eye to the things that are happening right before us.  Especially, when it’s a contradiction to what our country and flag are suppose to stand for. I was once told that too often in life we turn our backs on or ignore the things that don’t affect us directly.  While Kaepernick and his fellow NFL teammates may not have been affected directly by our country’s warped since of justice and equality; their willingness to take a stand makes them more patriotic.  What’s the point in honoring the flag if the principal’s behind which it stands are flawed? If our country is suppose to represent equality, justice, and freedom and we somehow fall short of that then we need to come together not as, Blacks, Whites, Asians or Hispanics but as Americans to ensure that we practice what we preach. So, when you ask me if refusing to stand during the national anthem or not honoring the American flag is admirable or disrespectful. I’d have to say it’s admirable. Refusing to stand helps bring awareness to our flaws and hopefully with awareness, it can bring change, so that in the future we will all be proud to stand during the national anthem.