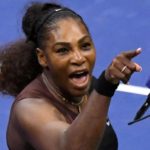 “I just don’t understand what he was talking about,” Williams said.

Williams denies she was being coached from the stands, despite her coach Patrick Mouratoglou saying he was sending her signals.

“I just don’t understand what he was talking about,” Williams said.

Williams, who was aiming to equal Margaret Court’s record of 24 Grand Slam singles titles, said she had not received any tactics from Mouratoglou, telling the umpire she would “never cheat to win and would rather lose”.

Speaking to The Sunday Project on Australia’s Network Ten, she added: “I asked him (Mouratoglou) ‘what are you talking about you were coaching? We don’t have signals, we’ve never had signals’.

“He said he made a motion. So I was like ‘you made a motion and now you told people that you’re coaching me – that doesn’t make sense, why would you say that?’

“I was on the other side. I didn’t see the motion. It was just a really confusing moment, I think, for him.

“What I’m trying to do most of all is to recover from that and move on.”

Following the accusation of coaching, Williams was punished for racquet smashing and verbal abuse, following several outbursts that saw her call the umpire a “liar” and “thief”.-BBC

'I don't understand why he said that'.

Serena Williams has responded to her coach's claims he was giving her signals.

Mixed signals: Serena Williams hits out at own coach over US Open scandalhttps://t.co/ZH77QbD0um

Ran into some Avatar Airbender amazing fans tonight. (Loved meeting you)! And yes I’m watching the last avatar…. again…. tonight…. we need our own emoji

Women can’t get away with even half of what a guy can do, says Serena Williams https://t.co/8KU0olcXIk (via @thefield_in) pic.twitter.com/R4bYrcWBAg

Everynight she goes to sleep I think about her and watch videos all night until I fall asleep. #thismama is a bit obsessed. Tell me I’m not the only one.

Serena Williams' daughter did the most incredible thing after mom's loss https://t.co/uDYXluiCV5 pic.twitter.com/MgkTPcREWR

This is an extraordinary time for 35 & over ?s in golf & tennis. What come back is most impressive? @rogerfederer after knee surgery 6 months away winning 3 majors & #1 again or @serenawilliams giving birth w many complications long recovery 2 major finals or @TigerWoods? Venus?

Serena Williams reveals the famous face she texted after her US Open outburst https://t.co/FZEhZke6vm pic.twitter.com/FElImTWEeE

I mean this in a completely innocent way and genuinely want the answer not meant as anything negative, but why is nia jax up for a game changer award in the same league as people like Serena Williams, what has nia done? I feel like I'm being naieve here? @FanSidedDDT

Serena Williams is the greatest tennis player of all-time, but while that may be her profession, she certainly has other talents.https://t.co/lub7mBCfNQ

“Why would you say that?”

Serena Williams has responded to her coach’s claims he was sending her signals during the US Open final.

“We have known each other for a long time, but we really, kind of, are relying on each other a lot recently,” Serena Williams said of her friendship with Meghan Markle. https://t.co/hUA2OyrJ7E

Serena Williams chronicles the complications associated with her pregnancy. Now here is a wealthy black woman with an extremely loving and supportive spouse having issues. Imagine what it’s like for the average black woman? https://t.co/EF86bJCiFw

Serena Williams opened up about her friendship with Meghan Markle, and how recently, she has reached out to her for support https://t.co/GHlBqxzDwF

[POPULAR ON EWN] #SerenaWilliams says she is trying to “move on” from the incident that overshadowed her #USOpen final loss but remains perplexed at her coach’s admission he illegally signalled to her. https://t.co/j15qBPezi5 pic.twitter.com/PFtUx0dvcM

Serena Williams Opens Up About Her Close Friend Meghan Markle: 'We Rely on Each Other' https://t.co/SDR7U8BE9s