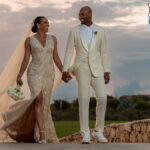 Shaquille O’Neal’s ex wife and star of Basketball wives Shaunie O’Neal recently got married to her partner Keion Henderson In Anguilla according to reports from People Magazine. There were about 200 guests at the ceremony of O’Neal and her new husband who just so happens to be a pastor.

“I just lost my dad in February,” O’Neal tells PEOPLE. “So, I really struggled with how I was going to get down the aisle. Losing my dad in the midst of planning this wedding was a lot, so my sons handed me off.” -Shaunie O’Neal for People Magazine

“I think after that first visit, we knew this was the place we wanted to get married,” O’Neal, 47, tells PEOPLE. For Henderson, 41, Anguilla’s rich history and welcoming residents made them “proud to connect to” the island and “start their journey” there. -Shaunie O’Neal for People Magazine

“I was in California getting ready to preach. … She finally agreed to meet me,” Henderson tells PEOPLE. O’Neal had been out to dinner with a friend earlier that evening and told her future husband she’d go out with him “if she had time after eating.” -Shaunie O’Neal for People Magazine

So for the next six hours, they connected over family and faith. “But then I walk her to her car, give her a sideways hug, and I let her get in the car and drive off,” the groom says.

“He didn’t even try to kiss me!” his bride interjects. -Shaunie O’Neal and Keion Henderson for People Magazine

Henderson says she gave him “complete pandemonium” for weeks after he fumbled that first smooch. He made up for it at the perfect time, though: “I showed her the kiss I would have given her the day I met her,” Henderson tells PEOPLE of their first kiss as husband and wife on Saturday.

Henderson fit right in with her family long before the “I dos,” his bride says. “He’s been amazing to just step into our lives and fill a void that’s been there for a minute in a space of just being here with me, cause I haven’t had somebody,” she says. “They love him which makes me love him even more.”

The feeling is mutual for the groom. “She’s amazing. She’s just the most laid-back, hilarious, fun-loving person. She’s a woman of faith,” Henderson gushes. “She can cook, she can dress, and she can sing!”

As for what’s next for the Hendersons, “we want to build a legacy together,” O’Neal says. The next chapter for her is about “growing, evolving, and becoming,” she says. -Shaunie O’Neal and Keion Henderson for People Magazine