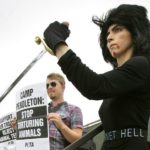 Was just briefed on the shooting at YouTube’s HQ in San Bruno, California. Our thoughts and prayers are with everybody involved. Thank you to our phenomenal Law Enforcement Officers and First Responders that are currently on the scene.

Authorities don't know of a motive for the shooting, but they are investigating a website that appears to show the same woman accusing YouTube of restricting her videos, reports the Los Angeles Times https://t.co/p8Uh39LRax

In light of the shooting in San Bruno at YouTube, will the @NRA apologize for this disgusting tweet in which it calls on its members to “rise up” against the company’s decision to take down how-to gun videos? https://t.co/5RgvFf02wT

The YouTube HQ shooting is proof that this is NOT just schools. Our country has a GUN problem. End of story.

Reports are out that the YouTube shooter is identified as Nasim Aghdam, a Muslim woman. Leftists are pulling tweets fast.

#YouTubeShooter was a Muslim woman who knew no one at the company. Digest that. https://t.co/Kg3DQSXLLK

I wonder how long it would take for the media to report that Nasim Aghdam was an Iranian muslim, and a PETA activist who posted videos complaining about youtube. It took the media less than a couple of hours to report that Cruz was a white supremacist. #youtubeshooter #YouTubeHQ

No, Nasim Aghdam is NOT Muslim because she "has a Muslim sounding name."

Cut all of that Orientalism out.

Well, they are probably basing it on this pic, but:
1. Only 37 votes in the poll
2. Tons of them saying NOT jihadi
3. Some may have taken it seriously. To her that scene maybe a joke. pic.twitter.com/7mRIi855ac

Unless you are a Muslim man or a White man it’s NOT Terrorism!
By definition a female like Nasim Aghdam cannot be a Terrorist!

So a lot of people happy Nasim Aghdam isn't a racist white guy. So victory for racist ppl? Although she isn't some angry radical Islamist either, but she's Iranian so close enough for American racist… Was a lefty mad about censorship, I thought only right wingers were censored?

@CNN says this act of TERRORISM by Nasim Najafi Aghdam was “workplace violence.” She shot the place up because she was mad at them! Isn’t that what the school shooters use as an excuse?? Isn’t that terrorism?? Unfair reporting because she’s an Iranian woman is RACIST!!!

@islandjake5 @JohnSymons @seanhannity Have you noticed the DIFFERENCE in the MSM tone about the IRANIAN woman Nasim Najafi Aghdam YouTube shooter? Poor troubled thing!! NO outrage, no rallies, no David Hogg!! A nutty white guy…Racist, NRA hate filled, take away ALL the guns!! pic.twitter.com/QRlkGlMOVh

Media lists all as "white shooters"