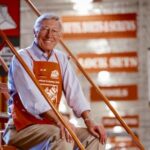 The billionaire, an avid supporter of the president, told the Atlanta Journal-Constitution in June that while he didn’t “agree with every move” Trump has made, he has still “produced more than anybody else” while in the White House.

“If we look at this country, I would say that we are better off today than we were eight years ago or six years ago,” he said, according to the Journal-Constitution.

Since retiring from Home Depot in 2002, Marcus has become more involved in politics, donating millions to the Republican Party. He also donated $7 million to Trump during the 2016 presidential race, according to the Center for Responsive Politics.

Social media users, including Democratic Coalition Against Trump Chairman Jon Cooper, criticized Marcus on Twitter, and many have used the hashtag #boycotthomedepot to say they won’t shop at the store, while others said they plan to cut up their Home Depot credit cards. -Home Depot