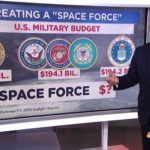 On the one hand, Space Force is a foolish idea that solves no actual problems, but on the other hand, it's a great way to transfer taxpayer money to defense contractors

When I hear the term "Space Force" I think of boys playing in a sandbox with their G.I. Joe's and model rocket ships, not a sober or coherent evaluation of the risks of military escalation in or on the final frontier.

Pence just doubled down on the need for a Space Force. This from a man who probably believes the Earth is just 6,000 years old. #ThatIsntHowYouScience

The White House says that the Space Force, a sixth branch of the U.S. military, will be created by 2020. https://t.co/GSPZlDGocZ

Fifty years from now I hope there’s a zoo somewhere and all the Trumps are in a cage with all the Pences and people walk by and point at them and laugh and say “they’re the ones who tried to make a Space Force instead of making America a better place!”

Fuck a wall. Fuck a space force. If you really want to keep America safe, invest those funds in building the most advanced cyber security infrastructure this world has ever seen. Won't happen, though. Trump and Pence know they can't win without their little Russian daddy,

Trump and Pence want $8 billion for the space force.

POLL: Instead of spending billions on a Space Force, how would you rather see YOUR tax dollars spent?

Other suggestions welcome below.

How do I sign up for Space Force so I can get away from all of you???

My entry for Space Force logo.

Motto: A black hole you throw money into. pic.twitter.com/AdKUwdFf9Y

2020 when the Space Force is inevitably created and they’re recruiting:

Recruiter: “You should join the space force.”

Recruiter: “Actually we’re not entirely sure, we just kind of opened and I think we’re going to put nukes on the moon? No idea.”

I don’t know how it’s possible, but Wilbur Ross has already embezzled $6.5 million from Space Force.

Mike Pence wants $8 billion for the Space Force. Trump previously requested $18 billion for the border wall. Because this is America. Where we'll spend $8 billion to possibly discover new beings who are different from us. And more than double that to keep them away from us.

Trump has plans for The Space Force.

If you're like me and think a Space Force that spends $8B while people are without healthcare, clean water, or roads & bridges that are safe – is ridiculous,

And/or that the GOP is trying to distract us,

We've had the Air Force Space Command since 1982 and NASA since 1958, there is no need for the Space Force it's just another waste of tax payer's money.

Trump administration rightfully mocked for Pence’s military space force idea when our biggest threat is cyberspace and Russian interference. This is done deliberately. That SOB knows what he is doing!

With 2,950 people coming from more than 100 countries, the #Hajj_Hackathon organised by the Saudi Federation for Cybersecurity, Programming and Drones now has the title for most participants in a hackathon. #هاكاثون_الحج pic.twitter.com/J9HdJI4rVB

Maybe before we create a sixth branch of the military to patrol space, we should take Cyber security a bit more seriously since it is more of a threat than lobbing nuclear warheads into space.

States have a lot of work to do on cybersecurity, and they shouldn’t wait for kids to find the problems https://t.co/YdJWDSCgL1

No, this doesn't mean Space Force will be "cost-effective". It just means everybody thinks it's a joke. https://t.co/ipj2cXQbn0

The governments are creating a "Space Force Military" and are working with the largest private company that creates extremely high tech ?????????.

What was a prediciton I gave months ago?

Does it still sound like a "tin hat" conspiracy?

@VP and @realdonaldtrump can't wait to put on their SPACEFORCE uniforms and play dressup. Pence details plan for creation of Space Force in what would be the sixth branch of the military https://t.co/azSZ7N5H2q

Republicans complained about "wasting money on NASA and the shuttle" for decades. Now that the Space Force sounds militaristic it's a go. Pretty disturbing. Maybe we should use militarized language about healthcare.
Medicine Force.
Doctors offices could be disease strike teams.